Decades ago, when my brother was first hired out of graduate school, one of their Swiss clients was kind enough to send him a hands-on science-gift every Christmas. And my sibling was in turn generous enough to give them to me. When he no  longer worked for the company that was linked to that benefactor, I wrote to the Swiss Santa, explaining how my students had benefited from the educational experience made possible by their offbeat, well-thought-out gifts. They happily obliged, and until the financial crisis of 2008, every December, they continued to send us science-related kits and toys .

One of my favorites was a cyanotype kit. Cyanotype can be used as a printing process, but it’s also one of the oldest photography techniques, dating back to the 1840s. Through serendipity, the astronomer John Herschel first created the necessary emulsion of ammonium iron (III) citrate and potassium ferricyanide, which supply the ions needed to produce a beautiful blue precipitate. Before it can be used, the emulsion has to absorbed onto paper or cloth and then allowed to to dry in the absence of sunlight or any other source of ultraviolet.

Recently I dug out some cyanotype paper from the Swiss kit to review the chemistry involved and to witness another happy marriage of art and science. If the paper wasn’t over 10 years old and not slightly oxidized or affected by humidity, it would look greenish, the color of ammonium iron (III) citrate. But mine was a very pale blue. Yet because the changes are reversible, the paper still turned out to be functional. 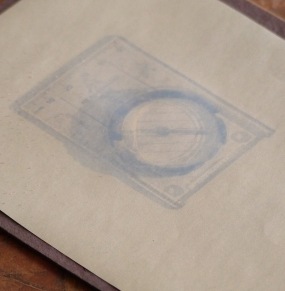 In the upper left photo, the compass has been sitting on the emulsion paper for about 3 minutes and the original light bluish color is fading. The paper has gone almost completely grey after 8 minutes of exposure, as seen in the photo in the upper-right-hand corner. Indoors, I removed the compass and the parts not exposed to light are now light blue (picture at 3 o clock position). But when placed in water for about 2 to three minutes, the bit of blue disappears (not shown). Finally as seen in the final photo, a deep blue appears in areas that were exposed to UV.

How do we account for all the color changes?

When ultraviolet strikes ammonium iron (III) citrate, (oxalates are also used and preserve better) the citrate converts to acetone dicarboxylic acid by donating an electron to the ferric ion Fe3+, reducing it to the ferrous ion, Fe2+. The Fe2+ in turn reacts with potassium ferricyanide( K3[FeIII(CN)6] · 3H2O) to create Prussian blue (containing ferric ferrocyanide FeIII [FeII(CN)6]+. But in bright sunlight, the reaction does not stop there. Instead the Prussian blue is converted into Berlin white (ferrous ferrocyanide = FeII2[FeII(CN)6] ).

Initially the only light-bluish parts are the ones that still have the compounds of the original solution, the parts that did not get exposed to ultraviolet light. Notice that because the sun was hitting the compass circle at an angle, it cast a shadow, and that shadow is light blue at this stage.

The reason that the light blue (or green if you have fresh paper) disappears is that the original soluble emulsion is dissolved away in the water.

As the paper dries and gets exposed to oxygen in the air, the Fe2+ that is in the grey compound(outside of the cyano-complex) of the light-exposed areas is oxidized back to Fe3+.  Prussian blue is generated. It’s the same blue end-product of the invisible ink trick that was part of children’s old chemistry sets. Peak absorption of light in the 690 nm region of the spectrum is used to move an electron from Prussian blue’s Fe2+, part of the cyano-complex, to Fe3+ ions , resulting in us perceiving a deep blue.

To use it as a printing technique, instead of placing an object on the emulsion paper, you can either draw on an acetate and then proceed as usual. Or you can print a black and white photo on a transparency and place it on the paper to create a cyanotype or a “blueprint”,  as old architects would say. Here are my blueprints of both suggestions, some loves of my life outside of science: trees and my wife. 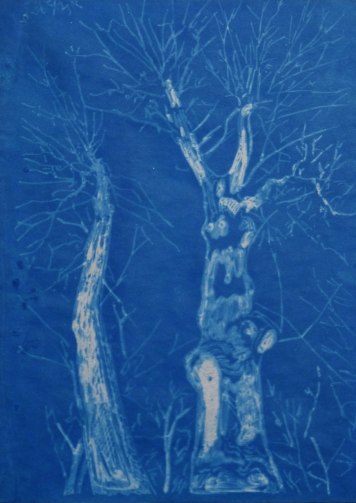