The ancients were drawn to lead because of its combination of properties: low-melting, very malleable and resistant to corrosion. But it turned out to be very toxic. Although lead’s dark side was revealed a long time ago, lead poisoning is still not a thing of the past. The health of workers and children continue to be seriously compromised as precautions in dealing with lead are ignored domestically in several places and abroad. Hopefully this set of four questions and answers will help the reader become a more vigilant and enlightened citizen with regard to lead.

1. A while ago, one of my summer jobs as a student involved working for a lab in a copper refinery. Why did our blood have to be monitored for lead when lead is not an impurity of copper ore?

Although lead is not an impurity of copper ore, silver, platinum and gold are. After electrolysis causes copper to deposit on the anode, the precious metals precipitate at the bottom of the electrolyte solution. After gold is separated from the other metals, its purity is measured by an ancient but accurate technique know as fire assay. And that’s where lead(Pb) enters the picture. Pb is used in that type of analysis because of its ability to dissolve gold and leave impurities behind. Its melting point is lower so that it can subsequently be separated from the purified gold. The gold sample is weighed before and after the assay, completing the purity-calculation.

Before the 1980s, when precautions were not taken in our fire assaying lab, the technicians developed high levels of lead in their blood. They were given paid leave to recover. When they returned to work, they were provided with a lead-free area in which they kept their non-work clothes apart from the ones worn in the lab . They had to wear respirators during the analyses and ventilation was improved. Routine blood analyses also became the norm for all employees in case they were assigned to work in the fire assay department or in nearby labs.

Unfortunately due to low standards, lead is still a significant occupational hazard in China. As the Chinese authors of this 2010 study point out:

Lead (Pb) and its compounds remain the leading cause of chronic poisoning (51.83%), followed by benzene (13.74%) and trinitrotoluene (TNT) (11.05%); 82.97% of the cases were distributed in medium- and small-scale enterprises. Nowadays, the risk factors of occupational poisoning have been transferred rapidly from developed countries to our country, from urban to rural areas, from developed areas to less developed regions, and from the formal to the informal business sectors.

Lead can damage through a variety of mechanisms, but we’ll look at the two most important ones.

Organisms either deliberately or inadvertently create uncharged, short-lived molecules with unpaired electrons. These so-called highly reactive free radicals can come in handy, for example, as one of the immune system’s defensive mechanisms. But free radicals can also turn against the host. Lead’s presence causes an overproduction of free radicals while also interfering with our ability to repair the damage from free radicals. (see adjacent diagram)

B- Ionic mechanism. A common charge for the lead ion is +2. Its ionic radius is also similar enough for cells to confuse it for calcium +2. This so-called ionic mechanism is what makes it toxic neurologically. Disguised, lead ion sneaks in across the protective blood-brain-barrier, and accumulates in astrocytes, specialized cells that help keep brain chemistry in balance. 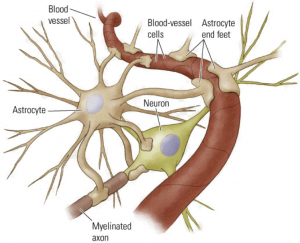 They can get Pb2+ out of the way with the help of binding proteins But the young developing brains of children have immature astrocytes that lack lead-binders. Lead’s unconfronted presence damages the specialized cells, interferes with the formation of the protective myelin sheath, and compromises the development of the blood-brain-barrier.

The ionic mechanism interferes with neurotransmitters, which lowers the intellectual quotients of children who have been exposed to lead. Children, when compared to adults, retain 3 to 6 times as much of the ingested toxin.

3. Why are there no excuses for the existence of lead pipes in our cities?

Considering the deadly nature of lead poison and the fact that so many natural waters dissolve this metal, it is certainly in the cause of safety to avoid, as far as possible, the use of lead pipe for the carrying of water which is to be used for drinking.

Amazingly, the above is from an 1845 report on water supplies for the city of Boston. Despite the warning, cities went ahead and used lead pipes in building water-distribution networks in the late 19th and early 20th centuries. Currently over 100 000 citizens in Montreal  are served by lead pipes.  Only in 2006 did they introduce a 20- year plan to completely remove them. In the meantime city officials advise households in affected neighborhoods with pregnant women and young children to install charcoal filters.

Luckily, leaching of lead is reduced by the introduction of phosphate ion during the water treatment phase. It causes a protective scale to build up inside the lead pipe, keeping most of the lead out of the drinking water. But such a procedure is a temporary, albeit, vital solution. When that chemical treatment has been ignored, tragedies such as the one in Flint, Michigan in 2014-15 have ensued. Meanwhile other American cities with ageing infrastructures continue to violate recommended concentrations of lead in drinking water.

4. Were lead levels in some Flint, Michigan homes so bad that they could have been detected by a simple wet-chemistry test?

Having often shown students how lead ion’s presence can be revealed by adding iodide ion and creating a startling canary-yellow precipitate, I wondered if an informed citizen of Flint would have been able to see such a product from carrying out the test on their drinking water.

During the crisis in Flint Michigan, homes had as much as 13 200 ppb (part per billion) or 13.2 mg /L or 13 ppm of lead. The simple iodide test has a   threshold of 20 ppm, so the answer is no; the wet-chemistry test is not sensitive enough, but astonishingly, the concentration of lead in their tap water wasn’t far off from the wet-chemistry’s detection limit.  Instead, atomic absorption was required to detect concentrations in the range of 0.005 mg/L  (= 5 ppb = recommended maximum) to 20 mg/L. It was thanks in part to the inspirational volunteer lab work of the Virginia Tech Research Team that the lead problem in Flint was brought to light.