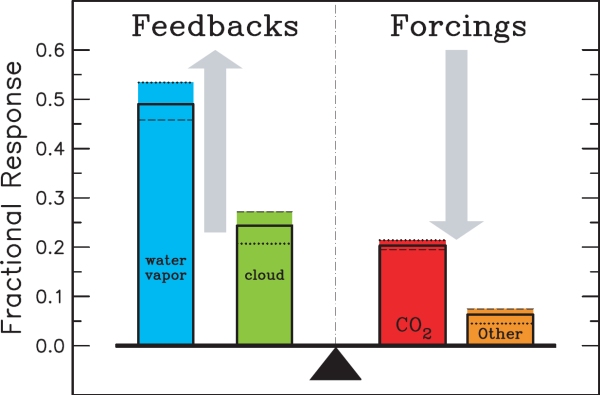 In science, something fruitful can arise from innocent or atypical questions.  One of many examples of this was a recent query in Quora, ” Can chlorine be potentially a greenhouse gas? Why or why not?“

Here’s what I wrote, but I’ve since added a little more detail.

An infrared spectrum is used to check if specific molecules are good absorbers of infrared energy, which qualifies them as “greenhouse gases”. Some chlorine-containing gases like CFCs fall into that category, but diatomic chlorine(Cl2) or monoatomic chlorine(Cl) do not. How come?

In order for molecular vibrations to absorb IR energy, the vibrational motions along the bond must change the dipole moment

of the molecule. A dipole occurs when pulling forces within a molecule do not cancel out. Why are there forces in the first place? These exist because of the differences in “greediness” for electrons between different atoms. So Cl by itself has no bonds so it can’t even vibrate. Diatomic chlorine does not meet the criteria either because, like O2 and N2 in air, it has the same atom pulling on each side of the bond, and equally important, any type of stretching or bending will not cause or lead to a change in net force between the bonded atoms.
The neat and thing about CO2 is that it doesn’t have a permanent dipole moment, but it can experience a net force during an asymmetric stretch. This happens when one oxygen gets squished towards the carbon in the middle of the molecule while the other oxygen atom stretches away, leading to a change in dipole. That’s what makes carbon dioxide a greenhouse gas. If the oxygen atoms each pull away from the carbon, the net force will still equal zero. With no net change, the symmetric stretch cannot intensify and cannot absorb infrared energy.

There is also some absorption in another part of the infrared spectrum, although not as intense but still due to a change in dipole. It happens when the CO2 molecule bends.

k of belaboring the idea, let’s point look at the H2O molecule, a strong and more abundant greenhouse gas than CO2.  The latter has a linear shape. Due to  water’s angular shape, water already has an overall dipole.  Even with a symmetric stretch a change in dipole will result. Specifically, the movement shown increases the net pull of oxygen. As a result such a stretch can also be amplified when it absorbs infrared.

By the way, why don’t we focus any attention on our emissions of water vapor? Simplistically, one might attribute it to relative numbers. Air on average is about 2% H2O gas. (The percentage breakdowns for atmospheric composition that are normally given are for dry air.) So although the combustion of petroleum and natural gas emits H2O, relative to CO2, the water produced causes very little change in the overall percentage of water vapor. Moreover, coal, which produces the most CO2 per kWh, produces little water when burnt because hydrogen only makes up about 5% of coal.  There is a net movement of water from land to ocean of 37 trillion tons of water per year. Of this total, about 12 trillion tons of water is in the air at any one time because water vapor only stays in the air for an average of 10 days. That’s 12 000 gigatons, of which we add about 3 to 5 gigatons(Gton) annually, a change of 0.03%. In contrast, we add 9 Gtons of carbon dioxide annually. After an increased withdrawal by oceans and land, there is a net annual  input of 4 Gtons to a pool of 840 Gtons, or a 0.5% increase, more than 15 times bigger than that of water.

But far more importantly,  in the real world’s dynamics, CO2 and other non-H2O greenhouse gases, are the major limiting factor in the greenhouse effect.

Without non-condensing greenhouse gases[such as CO2], water vapor and clouds would be unable to provide the feedback mechanisms that amplify the greenhouse effect. 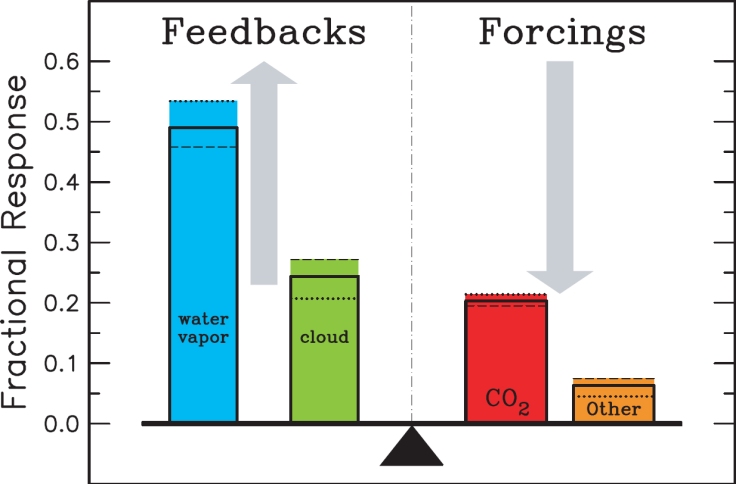 Other references for the above research:

Lacis, Hansen and al. NASA GISS  The role of long-lived greenhouse gases as principal LW control knob that governs the global surface temperature for past and future climate change 2013

I encountered the second question on a NASA blog. It’s based on a common misconception, but again it shows how even someone without the erroneous idea can still benefit from reading a thorough answer, such as the one given below by Rebecca Lindsey. The ozone hole and global warming are separate problems, but some of the minor connections between the two are rarely discussed in big media.

Are the ozone hole and global warming related ?

The ozone hole and global warming are not the same thing, and neither is the main cause of the other.

The ozone hole is an area in the stratosphere above Antarctica where chlorine and bromine gases from human-produced chlorofluorocarbons (CFCs) and halons have destroyed ozone molecules.

Global warming is the rise in average global surface temperature caused primarily by the build-up of human-produced greenhouses gases, mostly carbon dioxide and methane, which trap heat in the lower levels of the atmosphere.

There are some connections between the two phenomena.

The ozone hole itself has a minor cooling effect (about 2 percent of the warming effect of greenhouses gases) because ozone in the stratosphere absorbs heat radiated to space by gases in a lower layer of Earth’s atmosphere (the upper troposphere). The loss of ozone means slightly more heat can escape into space from that region.

Global warming is also predicted to have a modest impact on the Antarctic ozone hole. The chlorine gases in the lower stratosphere interact with tiny cloud particles that form at extremely cold temperatures — below -80 degrees Celsius (-112 degrees Fahrenheit). While greenhouse gases absorb heat at a relatively low altitudes and warm the surface, they actually cool the stratosphere. Near the South Pole, this cooling of the stratosphere results in an increase in polar stratospheric clouds, increasing the efficiency of chlorine release into reactive forms that can rapidly deplete ozone.