The legality of a substance of misuse is not correlated with its perceived harm.

This was the conclusion of a 2012 study published in the British Medical Journal. The data was based on consultations with 292 addiction specialists and psychiatrists working with substance misuse across Scotland. 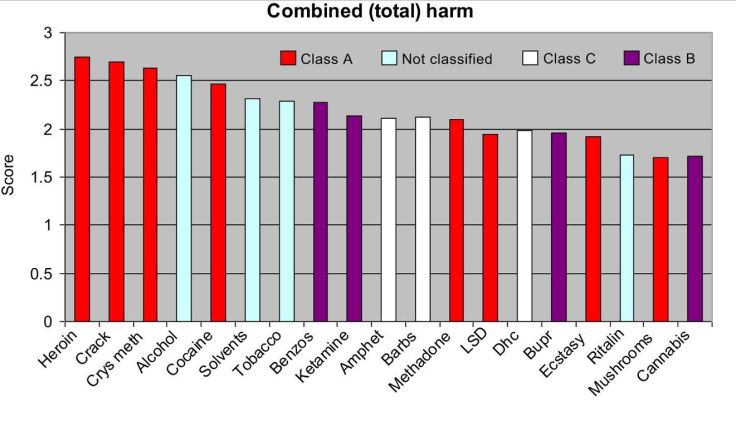 The “combined harm” includes damage to both the individual drug user and society at large. Class A drugs carry the highest legal penalties for possession and trafficking, Although the classification includes the 3 most harmful substances on the chart, the danger of half of Class A drugs is below average, and alcohol, a legal substance, is nestled in between cocaine and crystal meth. Furthermore alcohol along with tobacco and solvents, which are also legal, do more harm than any Class B or C substance.

The study was inspired by the fact that drug and alcohol-related deaths in Scotland are among the highest in Europe and have doubled between 1997 and 2012. Globally, over the past century, we have seen that avoiding prohibition (as in the case of alcohol) or aggressive punishments (as in the case of heroin and crack) don’t solve the plethora of social problems associated with the misuse of substances. Legislation is too simple a solution to such a complicated issue. But why is the problem complex? We will use cocaine as an example of how harmless leaves from a tropical plant Erythroxylum coca have led to a substance that wreaks so much havoc.

The source of cocaine, the coca leaf, has been chewed and brewed for tea traditionally without problems for centuries among its indigenous peoples in the Andean region.  Acullico, consists of keeping a saliva-soaked ball of coca leaves mixed with quinoa ashes in the mouth. When ingested in this manner, coca numbs the mouth slightly but basically acts as a mild stimulant and suppresses hunger, thirst, pain, and fatigue. Coca also helps in overcoming altitude sickness. The innocuous leaf is even considered sacred within some indigenous cultures.

Coca contains alkaloids, which are plant-produced organic compounds containing at least one alkaline nitrogen atom. Cocaine is specifically a tropane- alkaloid, meaning that its basic nitrogen atom bridges over a heptagonal ring.  Unlike the tropane alkaloids of the nightshade family, coca alkaloids are not produced in the roots but are biosynthesized directly in the leaf. The cocaine content in coca leaf ranges between only 0.5 and 1.0 percent, and in wild varieties, the fraction is even lower. Aside from having a diluted concentration of the drug, the coca leaf has other alkaloids and natural products that I speculate might alter the physiological response to cocaine when it’s chewed.

But since the 1850s, chemists have learned how to extract cocaine and purify it from coca leaves. A common method used today and, which is at the root of the drug trade, involves macerating leaves and employing several sulfuric acid extractions , followed by filtrations and pH-increases to precipitate a cocaine paste.  To further purify it, kerosene is used as a solvent followed by re-extraction with acid and more precipitation with lime. A 3rd major extraction is done with acetone or ether, followed by a precipitation with a mixture of acetone and hydrochloric acid. The product,cocaine hydrochloride, is filtered with bed sheets and dried with microwaves or in sunlight.

In this purified and therefore concentrated form, cocaine, unlike coca, acts as a local anesthetic, vasoconstrictor, stimulant and euphoriant. The pure drug’s anesthetic and vasoconstrictive properties drew the interest of doctors and surgeons in the late 1800s. Eventually, cocaine’s other properties were exploited by typically absorbing its powdered form through the nasal membranes—by “snorting it”. In the early 1980s, an alternate method of intake surfaced in U.S urban areas. Cocaine was heated with baking soda, and the product, “crack” was smoked to deliver even more intense highs. Cocaine defies classification due to its ability to interact with at least three different nerve cell channels or receptors. It blocks both the reuptake of dopamine and of norepinephrine. These mechanisms also play a role in its desirability and in its potential for addiction. 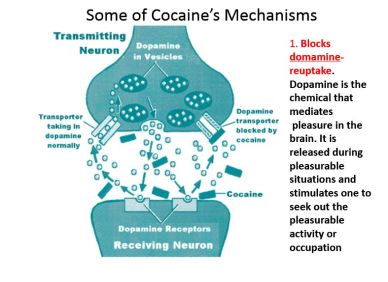 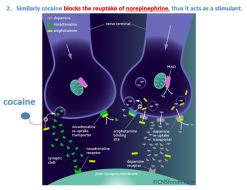 2. Why Is There Addiction?

In the Biology of Desire, neurobiologist Marc Lewis bucks the trend and argues that addiction is not a disease. He convincingly demonstrates that although the brain indeed changes over the course of addiction, the modifications are parallel to those experienced by sports aficionados, passionate lovers or people obsessed by a hobby. But bad habits such as addiction form deeper connections between the dopamine-releasing midbrain, and the accumbens and dorsal striatum. The pathways of these brain structures, which play central roles in desires and compulsions, override good judgment from the prefrontal cortex because of reinforcing feedback loops.

With regards to cocaine, after repeated use, genetic expression of proteins acting as dopamine receptors slows down in the accumbens. In the addict then, without cocaine, neurons in the limbic system become less sensitive to dopamine. Cocaine is needed to bring concentrations merely back to levels that existed prior to addiction.

Yet not everyone who experiences a few rushes from cocaine becomes an addict. People become more vulnerable to repeated use of a drug and its damaging consequences if in their youth, their personalities accumulated many unmet needs and goals and if they suffered repeated anxiety and depression. In a society where vast numbers of people are directed towards materialistic goals there is widespread dissatisfaction; there is neglect of human warmth and disconnections with the rest of our natural environment. This can only increase the need for self-medication.

3. The War on Drugs Amplifies Alienation

Tougher prison sentences for drug possession incarcerates too many people who are not necessarily dangerous. The illegality of distribution does not cut the supply of illicit substances; it creates an underground economy where only a tiny elite are raised above poverty. The leaders typically have a talent for extreme violence and bribing of officials, which are used to maintain the status quo. According to Tom Blickman, a specialist in International Drug Control Policy and Organised Crime, aggressive strategies have been applied to try to eliminate coca cultivation in the Andean region. While the strategy has failed, it has led to clashes between coca-producers (cocaleros) and local military, resulting in deaths and human right violations. The environment has also suffered in Colombia where spraying with herbicides (fumigation) is used to kill coca plants, which has only succeeded in displacing more coca production to Peru and Bolivia . Uncontrolled growth of crops encouraged by the underworld also creeps into ecologically sensitive tropical areas.

Writer Roberto Saviano, still living under police protection since 2006, penned Zero Zero Zero in 2013, the title referring to cocaine of the highest purity. The Calabrese Mafia known as the Ndragheta has a monopoly over the importation of cocaine and heroin into Europe from Latin America and Southeast Asia, respectively. Their counterparts are the Cartels of Mexico who supply the United States with most of its drugs, including cocaine. Americans, who have 4.5% of the world’s population, consume 25% of the planet’s cocaine. In Mexico, over 47,000 people were killed by violence associated with the drug trade between 2006 and 2011. Saviano points out that Cartel and Ndragheta drug profits have infested the legal economy. The most dramatic example of this occurred in 2008. During the world financial crisis, cash-strapped banks lowered their guards, allowing hundreds of billions of drug dollars to get laundered.

The poverty of Latin America and Southern Italy is in no way disconnected to the problem of organized crime. Those who get a higher education often leave the small villages, and some of those left behind get lured towards gangs or remain within privileged criminal families. The rest of the villagers are intimidated into passivity and silence, allowing either cartels or mafias to operate without opposition. Moreover, as humans, we have the unfortunate habit of subjectively judging people’s actions based on how they treat us. Thus favors and donations by powerful mobsters in poor towns severely distort the perception of what they are doing worldwide. Similarly, most drug users and the rest of us participating in an infested economy don’t realize how we are all part of the problem.