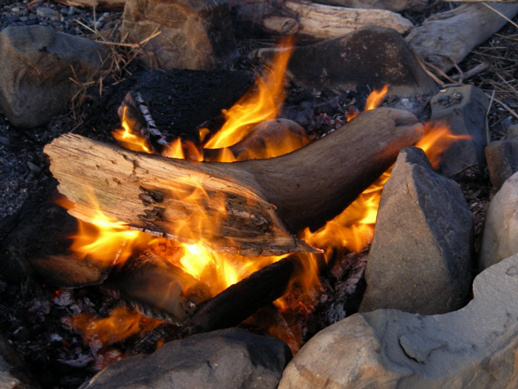 Birch bark, which is found in many parts of the U.S., Canada, Europe and China, is a great way to start a campfire. Rich in terpenoids, the paper-thin material ignites easily. The heat it releases provides enough activation energy to set small twigs ablaze, which of course should be placed in a tee-pee arrangement, so as to let in more oxygen. All of this should take place in a pit surrounded by stones, not to let wind take heat away from the young fire and not to burn the forest down.

The hues of a flame are rarely constant for a second, a hint that something complex is occurring within them. There is a set of chain mechanisms involving intermediate molecules that are needed for subsequent steps. Many of the in-between products are radicals, reactive molecules with unpaired electrons. Radicals are often created in the high temperature regions of the flame, but they diffuse back into the colder regions where they are needed to generate the final products. To reveal more details, laser-based investigative techniques have been used so as not to disturb the flame. Even when burning as simple a molecule as diatomic hydrogen, radicals like O, H, OH and HO2 form. When the combustion of hydrocarbons like cellulose and lignin in wood takes place, we get a greater variety of radicals, some of them carbon-centered. C2 and the radical CH arise in excited form and release blue and green light. Lignin-derived radicals involving benzene structures are not the healthiest things to inhale, but mere occasional exposure is probably nothing to worry about, unless there’s a concentration of wood-burning stoves in a particular area.  All of this underlines the fact that whenever we write an overall equation for a fuel consumed in a fire, it’s like we are seeing only the ingredients of a recipe and the final product without witnessing the cooking.

Hot, gaseous products of combustion expand and rise, stretching flames vertically. The ascension leads to pressure gradients, and fresh air is pushed into the fire. The circulation supplies it with more oxygen, the electron-thief that campfires depend on to release heat as more tightly bonded products like water and carbon dioxide are created. There’s energy needed to drive molecular fragments of cellulose apart, in the same way that you need to exert force against gravity if you want to push a ball up a hill. But once at the top, the ball can roll further down on the other side. With chemicals, it’s not the combination of mass, gravity and varying heights that accounts for differences in potential energy but Coulombic forces acting over a variety of distances between positive atomic nuclei and valence electrons.

Why is a wood flame predominantly yellow-orange? It has been proposed that it’s not the result of electron transitions; what’s supposedly responsible is incandescence of particles at about 1100 to 1200 oC.  Since the combustion of wood is incomplete, the flame’s soot particles, some of which are elemental carbon(others are polymers), emit part of their vibrational energy as photons. How fast the molecules vibrate depends on their temperature, and the hotter the surface, the higher the frequency of the photons emitted. The same mechanism would account  for the red glow of logs at the base of a fire. But the temperature is lower, in the neighborhood of 700 to 1000oC, hence a color of a longer wavelength and a lower frequency.  Different parts of the charcoal emit light of slightly different frequencies, intermittently and in different directions. A point on the surface of the charcoal particle that has just emitted photons will have lost energy and cooled slightly. Although exothermic reactions quickly compensate, from that same spot, the temperature will not necessarily be identical, especially in light of air movement and the exact frequency of photons is not necessarily replicated.

It’s well known that the ease of ignition and burning rate of wood vary greatly with moisture content. Specifically, a drop in moisture content of 10% results in an increase of 20–30% in burning rate. When wood is too dry the combustion rate increases, but an inadequate oxygen supply leads to more undesirable emissions. The combustion rate also depends on boundary conditions and the species being burnt. Why does it vary with tree type? Wood composition is not constant.  Wood is essentially a matrix of cellulose and other carbohydrate fibers (hemi cellulose) reinforced by the adhesive binding action of lignin. But hardwoods can have anywhere from 18 to 25% lignin along with varying amounts of hemicellulose, usually a partly acetylated, acidic xylan. Softer woods have other hemicellulose fibers and more “binder”, 25 to 35% lignin. There is also an assortment of oils and other secondary products present.

The different wood recipes not only affect kinetics but thermochemistry. Softwoods, compared to hardwoods, release on average an extra 5% of heat, a maximum of 21 instead of 20 MJ/kg, to be precise. From the point of view of carbon dioxide emissions, it’s not a good idea to rely on wood as a primary fuel. For every MJ of heat obtained from wood, on average, 80 g of CO2 are emitted. In contrast, natural gas combustion only puts out 50 g per MJ.

Finally, when the fire dies and we’re left with ashes, what exactly are we staring at?   In general the ash is of an alkaline nature, with a pH of about 12, mostly due to the presence of carbonates of calcium and potassium, specifically CaCO3 and K2Ca(CO3)2. At higher temperatures about 1300 oC, calcium and magnesium oxides are ashes’ main compounds. Those alkaline compounds were not originally present in plant tissue. Neutral metals weren’t either, so the carbonates must have formed indirectly, perhaps ions precipitating with carbonic acid, derived from water and carbon dioxide.

In the same way that the nature of flames and soot depends on the type of wood, the more detailed composition of ash also varies. According to a fairly recent study, it matches the needs of trees growing in a particular area. Among ashes of all conifers and broadleaves tested, that of birch trees, whose bark started this discussion, has the most calcium, the 2nd most phosphorus and is the only one without aluminum. But birch ash only has a fraction of the potassium and magnesium ions found within that of poplars and maples, respectively. Like cremated people and exploding suns, trees leave a signature in their ashes.