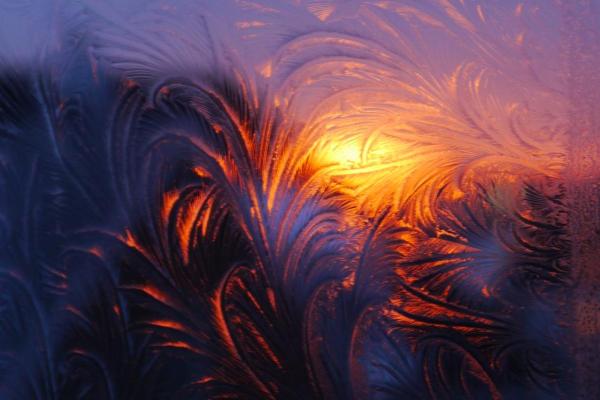 Hoarfrost patterns are often described as being feathery, needle-like or spiny. But this morning in a double-glass window that is no longer perfectly sealed, there was hoarfrost with a fiddle-head pattern. ( If we have to insist on comparing one aspect of nature to another!) Here’s what I saw in a time span of about 10 minutes, with and without a sunrise in the background. 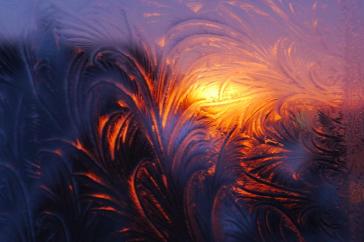 closeup of hoarfrost with sunrise in background 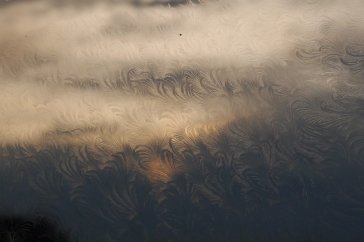 Hoarfrost forms when a surface’s temperature has lost enough heat to be below freezing, and at the same time an envelope of surrounding air is supersaturated with water vapour. Supersaturation  is a term used to describe greater than 100% relative humidity, a condition that arises when there is a lack of condensation nuclei. Similar to the way dew forms, the initial stages of hoarfrost formation at times feature liquid droplets. But the drops are supercooled somewhere between -1 and -2o C and eventually freeze as the temperature dips into the -3 to -5 o C range. Other parts of the hoarfrost, however, may go through a direct gas-to-solid transition.

In Antarctica, hoarfrost can form under similar conditions on the surface of snow. But crystal formation at low temperatures(< -59o C ) can cause electrostatic attractions between crystals. A gentle wind can then free hoarfrost and due to the static forces, the crystals clump together into intriguing iceballs. These have been dubbed yukimarimo, —again from our human tendency to compare one unfamiliar observation to something witnessed before, as marimo is a ball-like growth of water algae in Japanese.

Here is some yukimarimo filling a footstep.

On the same day that I learned about yukimarimo, we were walking in the park, a week after an ice storm. It was difficult to take a step without cracking the snow’s icy crust. In the “pothole-footprints” left behind by previous visitors were tiny little balls of snow. Was this  yukimarimo on a smaller scale? Not at all actually. Before I even had a chance to check Environment Canada’s weather site for the absence of precipitation since the ice storm, I noticed the the pellets were scattered in various spots, regardless of the type of surface. Recently there had been a brief, localized episode of sleet. But in the same way that we pin similar labels on different observations, we have a strong tendency to apply a recently learned concept to unrelated phenomena. And if we do not catch ourselves in the act, then as Holmes warned:

‘It is a capital mistake to theorize before one has data. Insensibly one begins to twist facts to suit theories, instead of theories to suit facts.’

-A Scandal in Bohemia 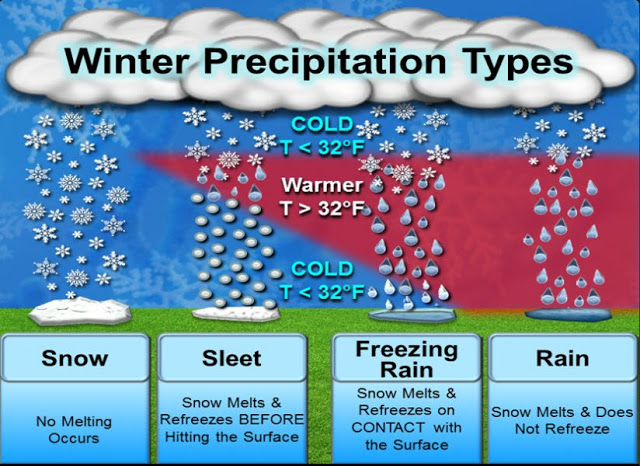