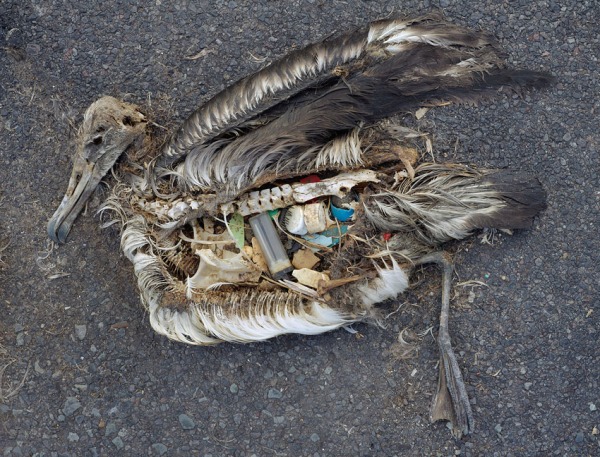 There’s irony in having small bits of floatable plastic debris and larger chunks of trash in our oceans. Millions of years ago, many of the hydrogen and carbon atoms within these man-made polymers were part of marine life. Death, deposition and pressure simplified the organic molecules of the dead. Then a species that indirectly evolved from these oceanic ancestors accidentally stumbled upon a crude liquid. Eventually they learned to use not only its energy content but its building blocks. Some of these were linked into molecular chains that could be molded into any shape. But these chains proved to be resistant to the usual degradative action of bacteria and fungi. Coupled with one-time use, over-consumption and poor recycling, we have a problem on our hands as the plastic in oceans severely impacts wildlife.

We all curse plastic when it breaks and worry about its other drawbacks, which are amplified by human behaviour. But they do limit our use of other resources such as wood and metal.  Plastics chemists discovered the catalysts that made plastics more affordable and kept devising recipes in order to suit practical needs like placing side chains with hydroxyl groups on a contact lens polymer that could attract enough water to lubricate the eyes.

Yet perhaps because of the negative connotations of plastic, even chemistry professors writing organic chemistry textbooks for freshmen avoid the topic. The classic and otherwise excellent Organic Chemistry by Morrison and Boyd published between the late 1950’s and 70’s devoted only 8 of its 1183 pages to plastic. One could argue that the basics have to be covered adequately before one can understand how high temperatures can induce petroleum’s larger molecules to become free radicals, which with rapid cooling, convert into small, unsaturated hydrocarbons. One of those products, ethylene, is then polymerized into polyethylene which is used in wraps, squeeze bottles, disposable gloves, garbage bags and to weld cracks in kayaks.

But relative to how much space three recent popular organic chemistry textbooks devote to plastic, Morrison and Boyd wrote a thesis. And yet while sitting on a chair cushioned by polyurethane, I look around me and notice the acrylo-nitrile-butadiene-styrene(ABS)on my keyboard and mouse, two polyester backpacks on the floor and a polypropylene pot under my avocado tree. Students should learn how such ubiquitous substances are synthesized, and that they have different tensile strengths and varying resistance to substances like alcohols. And they should learn about the carbon footprint involved in producing such large quantities and the consequences of not recycling most of them.

On the internet there are still people worrying about bisphenol A (BPA) leaching out of plastic pots and getting into their herbs and marijuana. For starters, the production of plant pots does not use BPAs. The latter is associated with polycarbonate plastic found in DVDs , plastic helmets and other hard plastic products., some of which are labeled as code 7. In 2008, Health Canada banned BPA from plastic baby bottles and luckily the European Union followed suit as a precaution. The former also reassessed dietary exposure to the chemical and found that it was lower than what was previously estimated. They concluded that exposure to BPA through food packaging is not expected to pose a health risk to the general population, including newborns and young children. Other regulatory agencies in the United States, the European Union and Japan agreed with their analysis. The average exposure was 0.055 micrograms per kilogram of body weight per day. Not all concerns regarding BPA can be dismissed. Fish seem to be the most BPA-sensitive organisms.

Depending on whose guidelines one examines, the predicted no-effect concentrations in freshwater range from 0.175 to 1.7 nanograms per milliliter or parts per billion(ppb). We also need more studies that look at the combined effect of various low level endocrine disruptors and other toxins in the environment.

While China’s economy has mushroomed in the last two decades, its short-lived plastic exports have found their way into the world’s still largest economy, the United States. At the same time, we’ve had computer, electronic game and phone revolutions, all of which have fed an exponential growth in the amount of plastic found in municipal waste. The only plastics that can be recycled economically so far, and in part only because China buys most of the refuse, are high density polyethylene(HDPE), polyethylene terephthalate (PET) and polystyrene. (recently China has refused some of Canada’s used plastic because of contamination.) Milk jugs are made of HDPE and PET is found in ziploc food storage bags, disposable water bottles, soft drink bottles and recently, vegetable packaging. The latter used to be code 6(polystyrene), which shrinks in the microwave when heated and is not as easily recycled.  in 2011, only 31% to 44% of Canadian homes had access to centres that could handle polystyrene, depending on the variety of that specific plastic.

Although more recycling can be done—the recycling rates for those two materials in the U.S. are only in the 30% zone—people have not warmed up to the 3 R’s“reduce” option. At least in theory, we could buy less plastic stuff when possible and drink tap water. To avoid plastic cups and cutlery at parties, spike the punch and get the guests to do the dishes. *
Such an approach does not have to negatively impact the economy. Money can be spent on non-plastic products and services and on paying down debt, which in the long run increases purchasing power.

The idea of biodegradable plastics is appealing. If they are produced on a global scale, however, there could be undesirable effects, especially if the raw materials are grown on land and not extracted from algae. The land needed for additional biomass could lead to deforestation, and then subsequent growth of crops won’t compensate for CO2 released by decomposing trees and biodegradable plastic. One thing about conventional plastic: when not incinerated but kept in the home or in landfills, it does, at least for a century, keep petroleum’s carbon away from the atmosphere. And no one will throw away Canadian plastic $20s.

* In the sixties throughout the 1980’s, a party with any combination of my 14 aunts was guaranteed to be free of plastic utensils.  After cooking a mind-blowing meal for 30 people, they were happy to chat among themselves and wash dishes faster and better than the average machine while the men played Italian card games —another activity with a low environmental impact :)—–the un-division of labour was terribly sexist, mind you!)

Sciences In the Mural Of Life

There’s irony in having small bits of floatable plastic debris and larger chunks of trash in our oceans. Millions of years ago, many of the hydrogen and carbon atoms within these man-made polymers were part of marine life. Death, deposition and pressure simplified the organic molecules of the dead. Then a species that indirectly evolved from these oceanic ancestors accidentally stumbled upon a crude liquid. Eventually they learned to use not only its energy content but its building blocks. Some of these were linked into molecular chains that could be molded into any shape. But these chains proved to be resistant to the usual degradative action of bacteria and fungi. Coupled with one-time use, overconsumption and poor recycling, we have a problem on our hands as the plastic in oceans severely impacts wildlife.

We all curse plastic when…

The beaver, Castor canadensis, is an official symbol of Canada, somehow representing our sovereignty. Each time we pick up a 5 cent-coin, the so-called nickel, which except for special collectors' editions is about 95% steel and only 2% nickel, we see an illustration of a beaver. But how much do we know about the natural history... END_OF_DOCUMENT_TOKEN_TO_BE_REPLACED

People who grow plum trees in their backyards or farms realize that these plants not only reproduce sexually by means of their fragrant flowers, but they can also establish a ramet. A ramet is a colony of clones produced by roots that surface from the ground and which then develop into full trees. Barring mutations, the... END_OF_DOCUMENT_TOKEN_TO_BE_REPLACED