It does not often occur to us that there are four common themes shared by chemistry, biology and human societies: unity, continuity, diversity and interaction.

There is unity in chemistry because all matter consists of atoms subject to nature’s four forces. With the intake of the appropriate energy, the electrons of any substance, and molecules themselves, can be promoted from their ground state to excited states, and all particles can change their energy levels though bonding. In biology, there is unity because all life consists of cells who share a fair amount of biochemistry—the use of DNA as an information molecule, the reliance on the versatility of proteins and the ability to harvest energy from ion gradients and molecules. It is only late in the 20th century when scientists began to suspect that the term “race” has little biological basis. There are consistently more differences within a group than there are between different so-called races, and all humans alive for the past 25 000 years are of the same species. Current and past societies also share remarkable similarities in that they all use a division of labor, knowledge, art, language and structure to flourish. 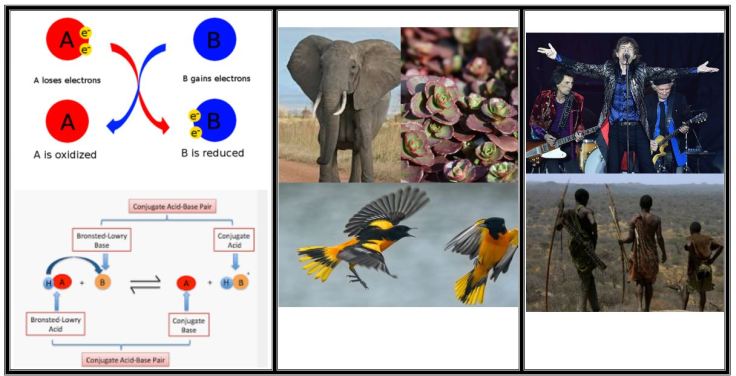 Due to their different structures, at a given temperature, not all compounds assume the same state of matter. The essential elements combine to form liquid, solid and gaseous substances that all play a role in the evolution and sustenance of life.  Life also depends on chemical diversity: it needs electron coordinators, electron muggers, electron donors, as well as elements which are ambivalent in that role.  Both positive and negative ions are relied on, and a range of solubility is indispensable. At the biological level, we are presented with a great deal of differences, which we can celebrate. Not only are there various forms with different survival strategies (ranging from rooting oneself in the sun and photosynthesizing all day long to a cheetah hunting for gazelles), but within our own species there are, living in a range of climates, people with a multitude of cultures who speak their own language, practice their own rites, prepare various foods and play different music, most of which can be enjoyed by almost everyone. Linguists maintain that each language embodies a unique vision of the world. If they’re right, what greater motivation is there for learning foreign languages? To live a full life, it might be a good idea to explore that diversity by going abroad with the power of both transportation and the written word or by interacting with immigrant neighbors.

While stars are continuously born and then destroyed, their cycle provides the universe with a continuous supply of the elements, including those essential to life. On planets, life forms only borrow essential elements and then return them to cycles of nitrogen, sulfur, carbon and phosphorus, to name a few. Because of a combination of genetics and the planet’s limited resources, an individual human’s stay here is brief. But we can turn that harsh truth into a delight by partaking in life’s continuity. As sexual beings, we can pass on our genetic material by selecting and loving a mate, and we can also pass on our ideas and images by cultivating our creativity. Our own children will do the same, so that both our species and culture will continue to evolve.

Every chemical messenger, each carrier of an amino acid, every sugar molecule and the myriad others used by life must either be synthesized or taken from something else that made them, which means that precursors of those molecules and their active parts had to react chemically. Even in the absence of reactions, there is interaction between parts of proteins; between different water molecules; between water and solutes and between the strands of DNA. Even clouds seem alive, and in a figurative sense, they are, because like living things, they are involved in partnerships with other entities on the planet. Many clouds are born from condensation nuclei that could be pollen or sulfur compounds from life at sea. Competition in biology or human societies is not always a battle for residence in the same niche.  It could involve an interaction not yet perfected.  Or, it can be mutualistic, as in the case of bees who are first drawn to the colors and ultraviolet patterns synthesized by certain flowers and then rewarded by other “fruits” of plant synthesis, pollen and nectar. In return, the bees inadvertently cross-pollinate the plants, increasing genetic diversity. Among humans, parties exchange specialized services and bond to form a stronger whole. Mutualisms of this nature include friendships, marriages, companies, schools: units that in turn interact to form human societies.