Despite below freezing temperatures, ice can melt in sunlight. This indicates that ice molecules can easily get agitated to above freezing temperatures even if surrounding air molecules have less energy of motion. If the melt-water runs down an edge, heat can be taken away again from the dripping water. An icicle begins to form. If water keeps flowing over the bud, the icicle will grow. It not only serves as a continuous source of crystals, dripping water helps take heat away from the growing icicle.

When ice forms, it actually releases heat. What, aside from water, takes heat away so that more flowing water can freeze?   It is the up-draft of air caused by the icicle being  warmer than its surroundings. The heat is taken away more slowly at the top of the icicle, where it grows more slowly. At the base, the opposite is true; growth is faster, hence the carrot shape.

With all that mind and the expectation of seeing the same pattern again, I was of course startled when I saw this yesterday:

By looking around, I soon realised that’s not what the icicle looked like when it formed. A meter to the left of that strange upside down V-formation, I noticed the following. 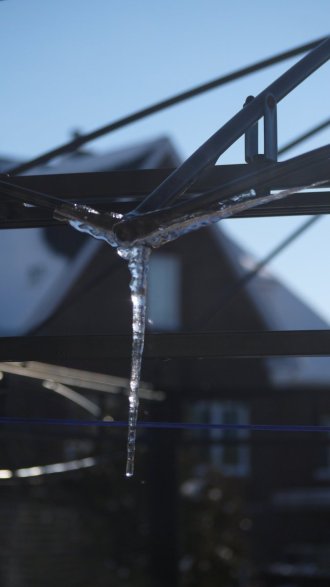 In all likelihood, the odd shape originally had three components, a familiar carrot shape but joined to a pair of other icicles that had grown along the edges of the angular frame. Metal is efficient at removing heat, and it probably adds a complicating variable to the shape of the arms clinging to the metal. One of the arms detached itself from the frame upon partially melting and then rotated; the other arm broke off.

I was tweeting these two pictures when I told myself I should be out there instead, observing to verify if guess was right. The same structure to the left now looked like this: 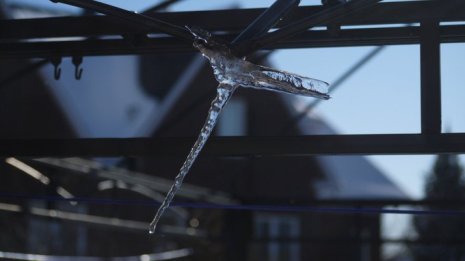 Seconds after I snapped the photo, the whole structure came crashing on the floor of the deck. It never got a chance to rotate as much as the original icicle.

The best, however, was yet to come. Annie van Leur saw my pictures and remarked the following:

Cute. However, not as interesting as our Michigan ice apples. When freezing rain coats rotting apples and the mushy rotten apple falls out, it leaves a shell of ice.

And she posted this:

Why are there often ridges on icicles? It’s ionic impurities in the water that play an important role. Graduate student Antony Chen designed a table-top apparatus for the controlled growth of icicles. He experimented with different conditions of temperature, water supply rate, ambient air motion, and water purity. When pure water was used, ripples did not appear on icicles. They looked like the icicle in Figure 1. Even a low salt concentration (0.008%) caused ripples to grow and travel on icicles (Figure 2). In the absence of salt,  dissolved gases or non ionic surfactants had no effect on the growth of ripples. When the air was still, icicles grew more tips (Figure 3). Gently stirring the air caused the shapes to become more monotonous.

The Point of Icicles https://uanews.arizona.edu/story/point-icicles

Experiments on the Growth and Form of Icicles https://tspace.library.utoronto.ca/handle/1807/44105