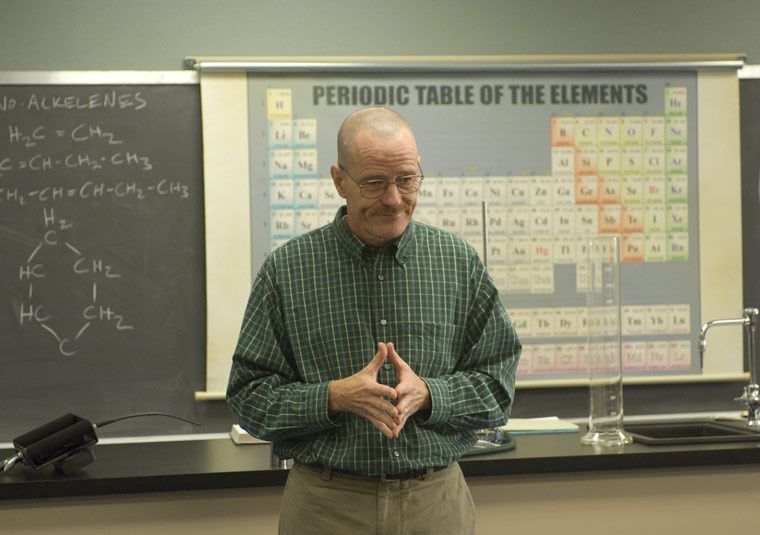 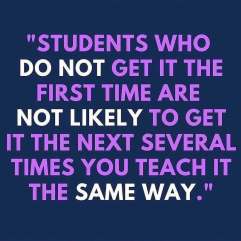 This meme appeared on a teachers’ Facebook group called TeacherGoals. Predictably, within 11 hours, it gained 900 likes among its 159 000 followers .

The saying is something I’ve heard often throughout my teaching career. Variation of approaches is at the disposal of every experienced teacher, who will use them successfully.  But as is the case with political views, it’s best not to feel smug or, worse, superior to someone else merely for adhering to a particular idea.

For instance, contrary to what is being promoted in this case, the same delivery could work the second time around if

(1) the lesson is delivered more slowly

(2) the teacher or student is not as tired

(3) if there are less distractions

(4) if the concept needs a period of incubation, which is often the case, and so on.

As usual memes oversimplify everything. They’re better at boosting Facebook’s revenues than at advancing pedagogy.

Here are a few guidelines and strategies that teaching colleges, certification boards and professional associations might find useful to better train science teachers. Some may seem obvious to the outsider, but you’d be surprised how seldom they are implemented. And, of course, our students get shortchanged.

(1) For high school math and science, a teacher should have at least a bachelor’s degree with a major in the main subject they teach. This not only increases the likelihood that the potential teacher’s basics have been reinforced, but it gives him an inkling of where a particular concept or skill can lead. Equally important, knowing that he is only scratching the surface of his subject, the teacher with a better background can be more convincing that the very basics are within anybody’s reach—as long as there’s a bit of an effort on the part of both the student and the teacher.

(2) Work experience related to the subject is more of an asset that some people realize. Working in three different analytical labs gave me a lot of practical skills that came in handy in managing labs and keeping better standards for my students. Ideally, occasional work terms should replace so-called “professional development”, which often amounts to little more than exposing teachers to sales pitches from educational industry representatives or to people promoting the latest flavour of the year in pedagogy.

(3) Student teachers do not have to be sent into the field for the very long periods that have unfortunately become customary. Given that most student teachers are not as effective as most experienced teachers, a large chunk of the high school student’s course is compromised. As an alternative, student teachers can prepare several lessons and lab activities for other student teachers while being filmed. Peers along with the supervisor and student teacher can then view the films and give constructive criticism.

(4) The most common role model for human beings is the electron because most people choose the path of least resistance. If, by setting an example, a teacher can prevent at least some of his students from imitating the negatively charged constituent of matter, he will have taught them one of life’s most valuable lessons.