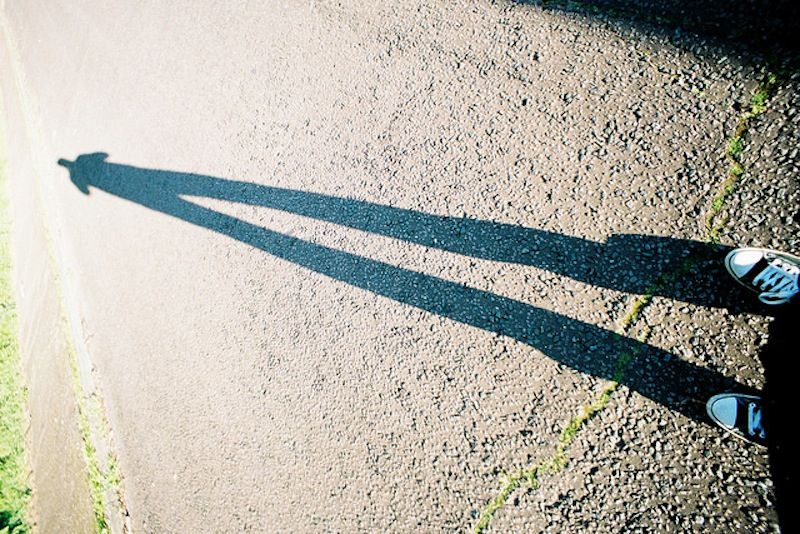 Walking back from an errand yesterday morning, I was startled by the length of my shadow, almost 10 meters long. Yesterday, the first day of winter, marked the pinnacle of shadow-length. From today onward, as the days will begin to lengthen, as solar angles become more generous, concentrating solar radiation on less area, the march towards spring begins and shadows will shorten.

For a variety of reasons, on any day the halfway point between sunrise and sunset is most often not exactly 12 PM  (It will only be so, after adjusting for daylight savings time, for a couple of days in January and for part of July and August). The so-called solar noon yesterday occurred at 11:52 PM at our longitude and latitude in Montreal, Canada. Like most people,  I made sure I was out in the cold, standing upright on my deck with a tape measure to determine the length of my shadow.

At that time, my 75.0 inch frame, including the one inch hat, cast a shadow 196 ± 2 inches in length. (Using the actual solar angle corrected for atmospheric refraction  it should have been a bit over 194.7 inches). 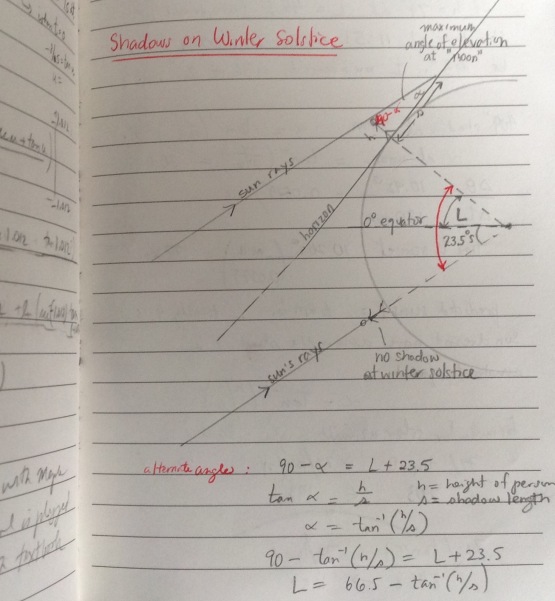 Using the fact that at a point directly south of us along the Tropic of Capricorn at a latitude of 23.5º South, the sun is at the zenith, so no shadow is cast. This is a situation similar to what Eratosthenes used to estimate the circumference of the Earth. But here we could also use the alternate and equal angles to derive an expression for latitude. Substituting h = 75.0″ and the measured shadow length = s = 196″, Montreal’s latitude works out to be 45.6º, pretty close to its accepted value of 45. 5º.

The nice thing about measuring the shadow at solar noon is that since the solar angle changes very slowly around midday, the shadow-length is relatively stable for several minutes. At about three in the afternoon I went out and measured my shadow, which was much longer than what was of course the shortest shadow of the day at solar noon. Fifteen minutes after 3 PM, the shadow had lengthened considerably. This not only happened because the sun does not sweep across the sky at a constant rate, but also because the tangent ratio is more sensitive to changes in smaller angles that occur shortly after sunrise and before sunset. Here is a plot to make what I just pointed out more obvious: 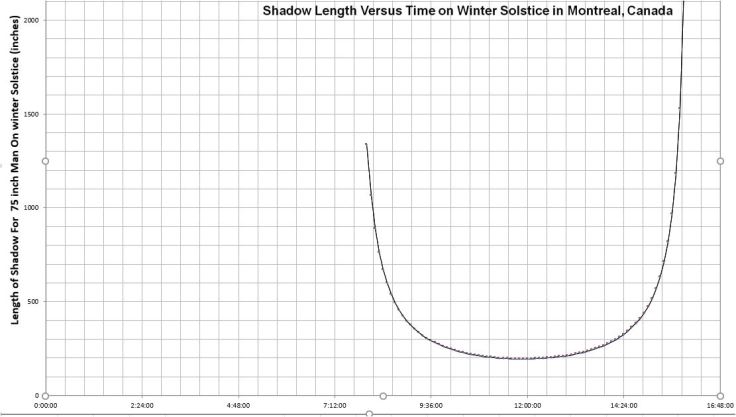 If you enjoy these types of experiments and calculations, and you want to verify your results, there is a great spreadsheet online with all sorts of astronomical calculations. They are set up so that you could easily adapt them for your own space and time coordinates. It is made available at no cost by the NOAA Earth System Research Laboratory.  Using their formulas, here is a graph of maximum solar angles I created for all days of the upcoming year for Montreal , Canada. As elevation angles increase, it’s not only shadows that get amplified. Ultraviolet rays also intensify, and knowing which months of the year receive the most helps us take precautions for our skin’s sake. 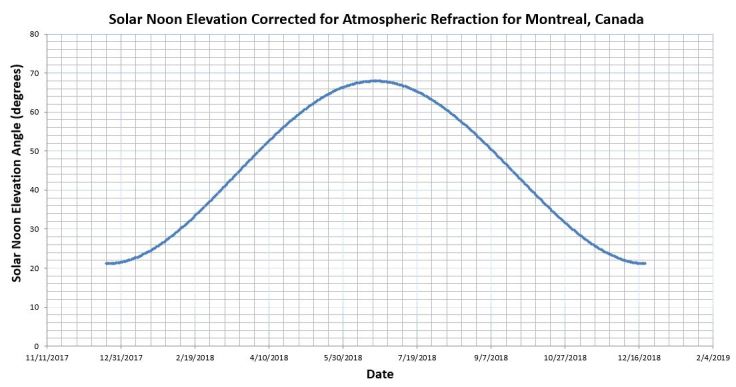