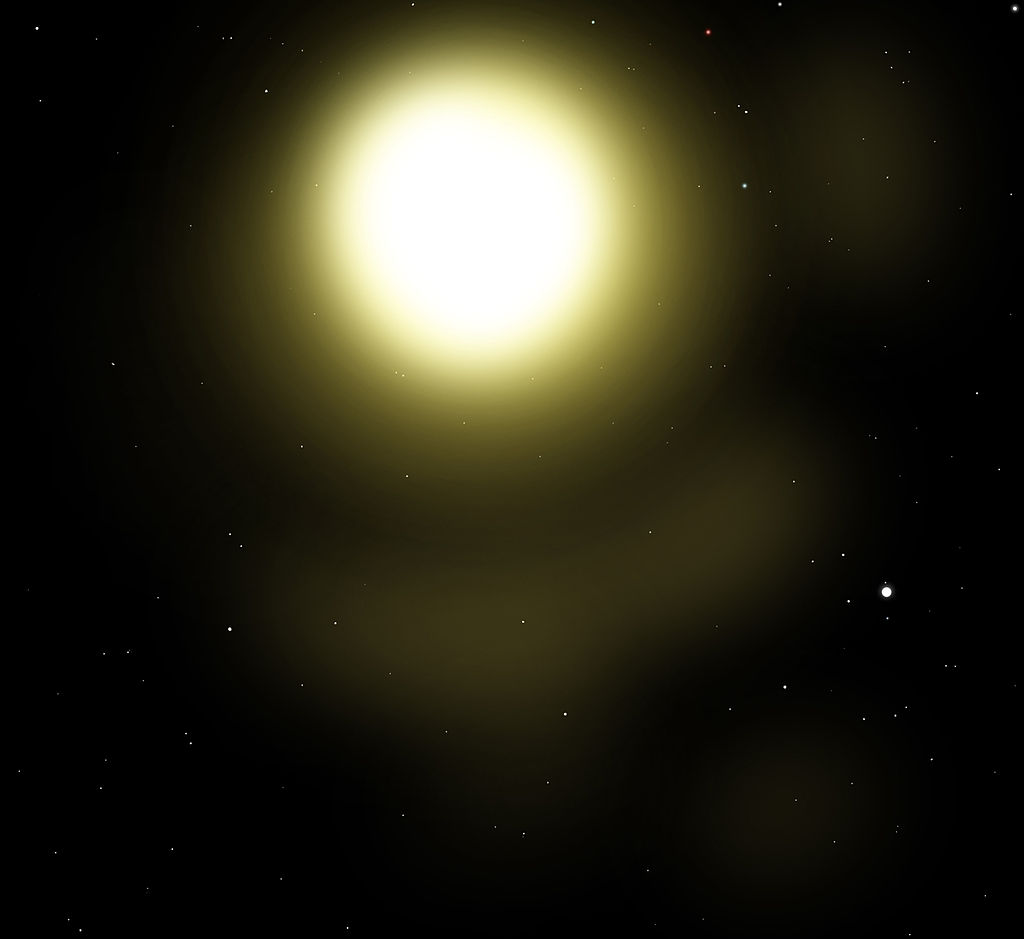 The Stars in the Brazilian flag are not randomly drawn.

For instance, in the lower left area of the circle are six stars from the Canis Major constellation. This morning while the rest of the family either snored or dreamed, I walked the dog at an early hour under relatively dark skies. Thanks to our dim streetlamps and a waning moon. I was able to observe the fourth brightest star of Canis Major, designated as delta (δ). Named as such because δ is the fourth letter of the Greek alphabet, it also has the common name of Wezen. Deceivingly it only seems dimmer than the very bright Sirius, the alpha-dog star, because Sirius is a lot closer to the Earth.

How do we know how far away Wezen is?

Hold a finger close and directly in front of your nose. Close one eye. Close the other eye while opening the first one. The finger seems to move against the background. If you hold the finger further away and repeat the exercise, the finger still seems to move, but not as much. Similarly for a given star, if it can be observed from two distant viewpoints along earth’s orbit around the sun, the star, will seem to be in slightly different positions against the background of more distant stars. If the distance between viewpoints is known and the angle of apparent movement is measured, simple trigonometry can help us calculate the distance between our sun and the star. The problem is that the angle is extremely small—after all, any star is a lot further away than your finger can possibly be by a factor significantly larger than the ratio of the orbit’s diameter to that of your eye-separation. A small uncertainty in angle can be amplified into a large error in distance, limiting us to measurements of only “neighborhood stars”. For more distant stars, other techniques involving Cepheid variables and type 1a supernovae have to be used. But thanks to Hipparcos, a scientific satellite of the European Space Agency (ESA) especially devoted to astrometry, parallax measurements have improved recently and are definitely accurate enough for a Milky Way star at Wezen’s distance.

How do you get absolute luminosity from distance and apparent brightness?

Due to that distance, which is far greater than the 8.61 light years that separates us from Sirius, Wezen’s apparent brightness is only 1.83.  Compared to the number line, the stellar brightness scale runs backwards. The dimmest stars have the largest positive values and the brightest have pronounced negative values.

To get the true or intrinsic brightness ( absolute magnitude) of Wezen, we can use the following formula:

where m = apparent brightness and d = the star’s distance from our sun in parsecs. Since there are 3.26 light years per parsec,

That’s a lot more intrinsically bright than Sirius, which has an M value of +1.42. It is Sirius’ proximity to us that makes it the 2nd brightest star in the sky after our sun and puts its apparent brightness at  – 1.47. If you imagine them to be both at Sirius’ distance from Earth, by doing the math you realize that Wezen would have an apparent brightness of – 9.52, which would be almost as bright as a half-moon.

Now if you rely on one other measurement for Wezen, something even more startling will be revealed. Its color is yellow, and with spectroscopic analysis of the lines from its excited atoms, it is classified as F8Ia, which gives away its surface temperature.

If you then plot absolute magnitude versus spectral class for various stars you get astronomy’s equivalent of the “periodic table”. It’s called the Hertzsprung–Russell diagram and it reveals a star’s stage in its evolution. 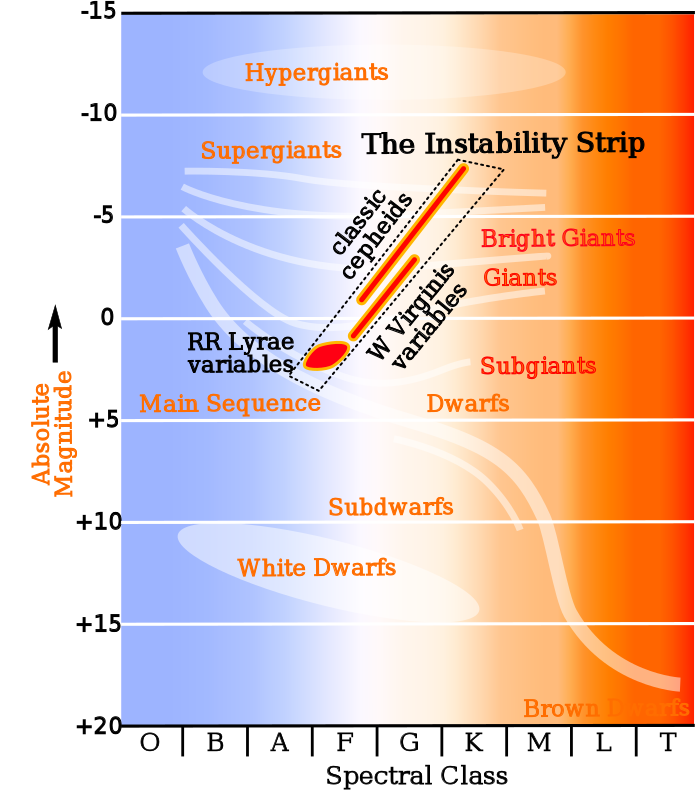 Using F8 as its x coordinate (each class has 10 subdivisions, zero through 9, so F8 is close to G’s lower bound) and its absolute magnitude of -6.63 as its y coordinate, we end up with a coordinate point on the supergiants line on the instability strip.

Our sun’s class of G2 and absolute magnitude of 4.83 place it on the main sequence, which is why we are still alive. Notice however that the sun’s spectral class is telling us that its surface is actually a little warmer than Wezen’s. If Wezen’s luminosity is so much greater than that of the sun, Wezen has to be a lot bigger, but its energy is spread thinly over its large surface area. But with more mass, gravity is a lot stronger, driving Wezen’s core temperature exponentially higher. This accelerates its rate of fusion. To make a long story short, Wezen is only 10 million years old and has already stopped fusing hydrogen, whereas the sun has celebrated its 4.6 billionth birthday. Moreover, the sun will also stay on the main sequence long enough to double its present age.

It seems that Wezen has already started to expand. As it fuses helium, it will become a red supergiant and eventually go supernova within a mere 100 000 years. When that happens, in our night sky, Wezen will appear almost as bright as Sirius and brighter than every other star. It’s comforting to think that maybe our descendants will walk with their dogs early one morning and marvel at it.