Whether you’re a researcher, programmer, doctor or professional athlete, most of the satisfaction you derive from work probably comes from uncovering some truth, problem-solving, treating the ill and mastering a sport, respectively. Money is not the main motivator as long as there’s enough to raise a family.  But here’s where things get complicated. If you live in a society where basic needs such as shelter, healthcare and education begin to get prohibitively expensive, people with highly specialized skills will demand much higher salaries and usually obtain them. But those whose skills are more commonplace are not in the same privileged position. They have to settle for less because it’s easier for someone else to come along and accept a compromised offer. The majority of people consequently have an increasingly difficult time coping if the daily essentials can only be attained by precariously accumulating personal debt.

Some governments are fully aware of this dilemma. It’s the reason they tax those with higher incomes. The revenues are used to provide the entire population with affordable education and health care. For the most disadvantaged, housing is also subsidized.  But most governments of the world are not committed to such a path. And even among those who are, the commitment has wavered, resulting in a widening gap between rich and poor and more poor people.  As mentioned by the Conference Board of Canada, some economists argue that institutions have blocked income-disparity mitigation by allowing lower unionization rates, low minimum wages, deregulation and national policies that favor the rich. This pattern is not only of concern from an ethical standpoint, but it’s also socially and economically destabilizing.

Income inequality in Canada has increased from 1990 to 2010. This reverses the trend experienced from 1970 to 1990. Although we are doing better than the United States where inequality has increased consistently since the 1970s, a minority of countries like Norway and Belgium have done better than Canada and bucked the common trend.

But just how is income inequality measured? We begin with an idealized situation of total equality where any percentage of the population equals the percentage of net income earned. In other words if you are looking at half the population, then they would earn half of all income. And in such a society if you considered only a tiny 2% slice, then they would be receiving only 2% of the money-pie. That one-to-one correspondence of income fraction on the y– axis and population fraction on the x -axis generates the simple identity function y = x.

On the other hand, the Lorenz function ( L(x) ) describes the actual distribution of income. For example in the United States in 2008, 80% of the population took home only half of all earnings. Only 3.4% of earnings went to a sizable chunk ( 20% ) of Americans. When several points are plotted, a curve is obtained  representing L(x). 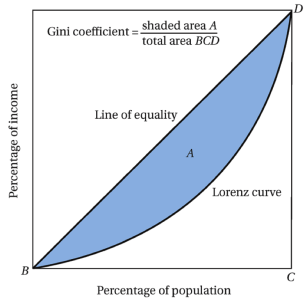 A 20th century statistician named Corrado Gini decided to calculate the area between the two functions and divide it by the area under y = x. The result is called the Gini coefficient. The bigger the number, the more income disparity there is.

If you enjoy math, you are probably wondering how the area under the curve is calculated. A simple method lies in googling “power function fit” and an online java program will use the data points including the previously mentioned (0.2, 0.034) and (0.80, 0.50) to generate an equation of the form L(x) =axb . In general terms, the sandwiched area in between the two functions is found by integrating the difference between the identity function and the curve.

The G coefficient according to its definition is:

By replacing L(x) with the power function that was fit to the curve, and after evaluating the integral, we obtain a Gini coefficient for the United States in 2014 of 0.390. Among OECD (Organization for Economic Cooperation and Development) countries only Mexico, Chile and Turkey fared worse. Iceland was the fairest country with a Gini coefficient of 0.246. Canada was in the middle of the pack at 0.313. The OECD site also points out that the average Gini coefficient for its 35 countries is the highest on record since they started to measure it over 30 years ago.