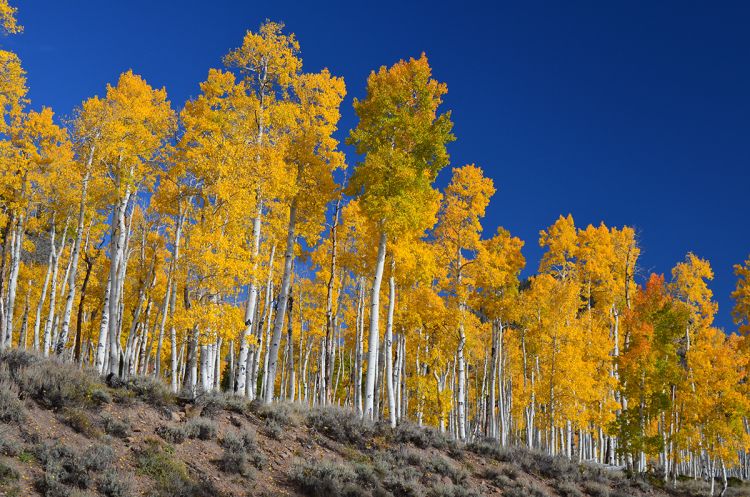 People who grow plum trees in their backyards or farms realize that these plants not only reproduce sexually by means of their fragrant flowers, but they can also establish a ramet. A ramet is a colony of clones produced by roots that surface from the ground and which then develop into full trees. Barring mutations, the new shoots, called suckers, are genetically identical to the parent plant. This also occurs in the wild. The world’s largest known organism, by mass, is a ramet of trembling aspen trees covering 43 hectares in the Wasatch Mountains in Utah. It is named Pando, Latin for “I spread”.

The aspen, Populus tremuloides, is one of many species of the genus, Populus. The tremuloides part of its scientific name, which designates its species, and the “quaking” or “trembling” part of two of its many common names originate from the fact that in the wind, its leaves tremble persistently. Mechanically it happens because the petiole (the long part attaching the leaf to the stem) is flatter than usual and also because the petiole’s flat part is at right angles to the plane of the leaf. When a leaf of the trembling aspen is disturbed by the wind, as the leaf turns, the flat surface of the petiole is then exposed to the same force and turns it back to its original position. Then the cycle repeats.

As to why such a feature has evolved, interesting hypotheses from ecologists and botanists have been proposed. The trembling may help the leaves absorb additional CO2, prevent excessive heat buildup and conserve water. It may also deter insects from feeding on the leaves.

Ecologically, the trembling aspen can play a key role as an intermediate tree towards the succession of more mature forests. Forest fires actually stimulate the aspen to clone itself; a ramet of 100 000 to over 200 000 suckers per hectare can prop up after a fire. They help feed a variety of wildlife including deer, sheep, elk, voles, hares and porcupines. When beavers chew aspens down, the cutting action, like fires, stimulates them to produce suckers.

Another intriguing adaptation of the trembling aspen is the way it responds to insects such as the aspen tortrix (a caterpillar) after they start to feed on its leaves. Their cells begin to synthesize salicortin and tremulacin, two glycosides that are toxic to insects.

These compounds are probably derived from phehylpropanoids, which are in turn made from aromatic amino acids. Since nitrogen is often a limiting factor for plants, it is one of the reasons that the protective compounds are only made when the need arises. You may also notice that, in both toxic compounds, the aromatic part attached to a pair of oxygen atoms is the basic structure of salicylic acid (aspirin’s raw material). The former is also chemically related to a pair of other natural products found in aspen, populin and salicin.

This remarkable set of adaptations of the aspen tree is why it’s the most ubiquitous tree in the world’s second largest country, Canada. It is found in all 10 provinces and two of the three territories, coping in a variety of soils and at a range of average temperatures cooler than those of the rest of the continent. Although it is difficult to predict the impact of greenhouse gas emissions on forest distributions in a pinpoint fashion, unabated climate change will move aspen forests away from lower latitudes.

US Department of Agriculture —Forest Service