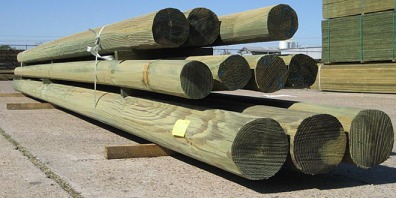 In January of 2004, Canada and the United States started to phase out the manufacture and sale of wood treated with copper, chromium and arsenic (CCA). CCA is used in pressure-treated wood to reduce rotting from insects and microbial
agents. The Healthy Building Network had lobbied government agencies, basing their position partly on sound research by David Stilwell of the Connecticut Agricultural Experimental Station. His work had demonstrated that after leaching out of CCA-treated wood decks, arsenic, a known carcinogen (group 1), was consequently accumulating in nearby garden soil and plants. The toxin can also transfer to skin and become ingested if children play on such decks.

As I explained in a letter this morning to my local member of parliament, the issue is still relevant because many neighbourhoods have CCA-treated decks built before 2004. Many of these have not been well-maintained and stained regularly, and acidic precipitation causes arsenic to be released from treated wood. ( It’s long been known that arsenic is a problem, so I wonder if the original tests, on what was then a newly treated wood-product, were carried out with tap water. At a higher pH, far less arsenic would have leached out. But as David Stillwell indicated, outside of the laboratory, decks are subjected to acidified precipitation, which is capable of dissolving more of the carcinogen.)

Many residents are still not aware of this problem, and I hope our mp will use her influence to help enlighten the public. She is a former colleague, so I hope that it will make a difference. The previous member of parliament did not carry out a much needed and recommended information campaign.

Thanks to a bank sponsor, a water-testing kit was freely distributed to Canadian high schools in 2008, and I used it to get a taste of Stilwell’s work. My report was published in University of Waterloo’s newsletter for chemistry educators.  If teachers obtained class sets of the kit, they too could have easily create meaningful labs like the one that I’m about to describe.

Since the kit is designed to test the amount of arsenic (other tests include manganese, sulphate, chloride, etc.) in water samples, I took about 5 grams of a 5-year old unstained sample of treated wood. Using pliers I cut it into several 1-cm to 2-cm pieces and let soak for 5 minutes in about 100 mL of tap water. After decanting the water into a thin bottle, I successively applied the three reagents of the modified Gutzeit test, which I will describe in detail later.
I also repeated the procedure using 1 mL of vinegar diluted a hundredfold to simulate the approximate average pH of rain samples in Eastern Canada. Of course, to make sure that the arsenic was not coming from the tap water itself, I ran a blank by applying the arsenic test to tap water that had not come into contact with treated wood.
The  results are summarised in the following table.

Admittedly, chopping the treated wood exaggerated the surface area actually exposed in the field, but a mere 5 minutes of soaking greatly underestimated the actual amount of leaching and physical displacement that occurs over the lifetime of a wooden deck or Hydro pole. For instance, David Stilwell found, next to 8 utility poles in Canada, an average of 262 mg of arsenic per kg of soil.

Here’s the chemistry behind the analysis, the so-called modified Gutzeit test.
The first reagent that’s added to 100 mL of sample contains tartaric acid with enhancers. In step 3 it will be evident why the acid is needed. Reagent #2, an oxidizer, is then added to remove hydrogen sulfide interference. Finally, with the addition of pure zinc powder reagent, inorganic arsenic ions (As3+ and As5+) are reduced to As3-, which, in the presence of acid, forms arsine (AsH3) gas:
(in the presence of As3+)
As2O3 + 6 Zn + 12 HCl → 2 AsH3 + 6 ZnCl2 + 3 H2O
(in the presence of As5+)
H3AsO4 + 4 Zn + 8 HCl → AsH3 + 4 ZnCl2 + 4 H2O
The arsine gas comes out of solution and reacts with a test strip
containing mercury (II) bromide (HgBr2), forming mixed arsenic
mercury halogenides:
x AsH3 + y HgBr2 → AsH2HgBr + As(HgBr)3 + other variants
Colours ranging from white to shades of yellow or brown depend on the amount of halogenides formed, which are proportional to the amount of arsenic ions in the sample.
Once the reaction is completed, the test strip is removed and matched to a colour chart to obtain the exact number of ppm (mg/L) of arsenic in the tested sample.
Safety Tips
The reactions should be carried out in a fume hood in case any arsine escapes and the reagent on the mercury strips should not be touched with bare hands. Any readers who are concerned about exposure to arsenic from decks constructed prior to the CCA ban should be relieved to learn that leaching can be greatly diminished by oil-based, semi-transparent wood stains, the kind that soak into the wood. In fact, Stilwell found significantly lower concentrations of arsenic in the soil next to CCA decks that were well maintained.

One thought on “Arsenic Still Leaching from Old Decks”