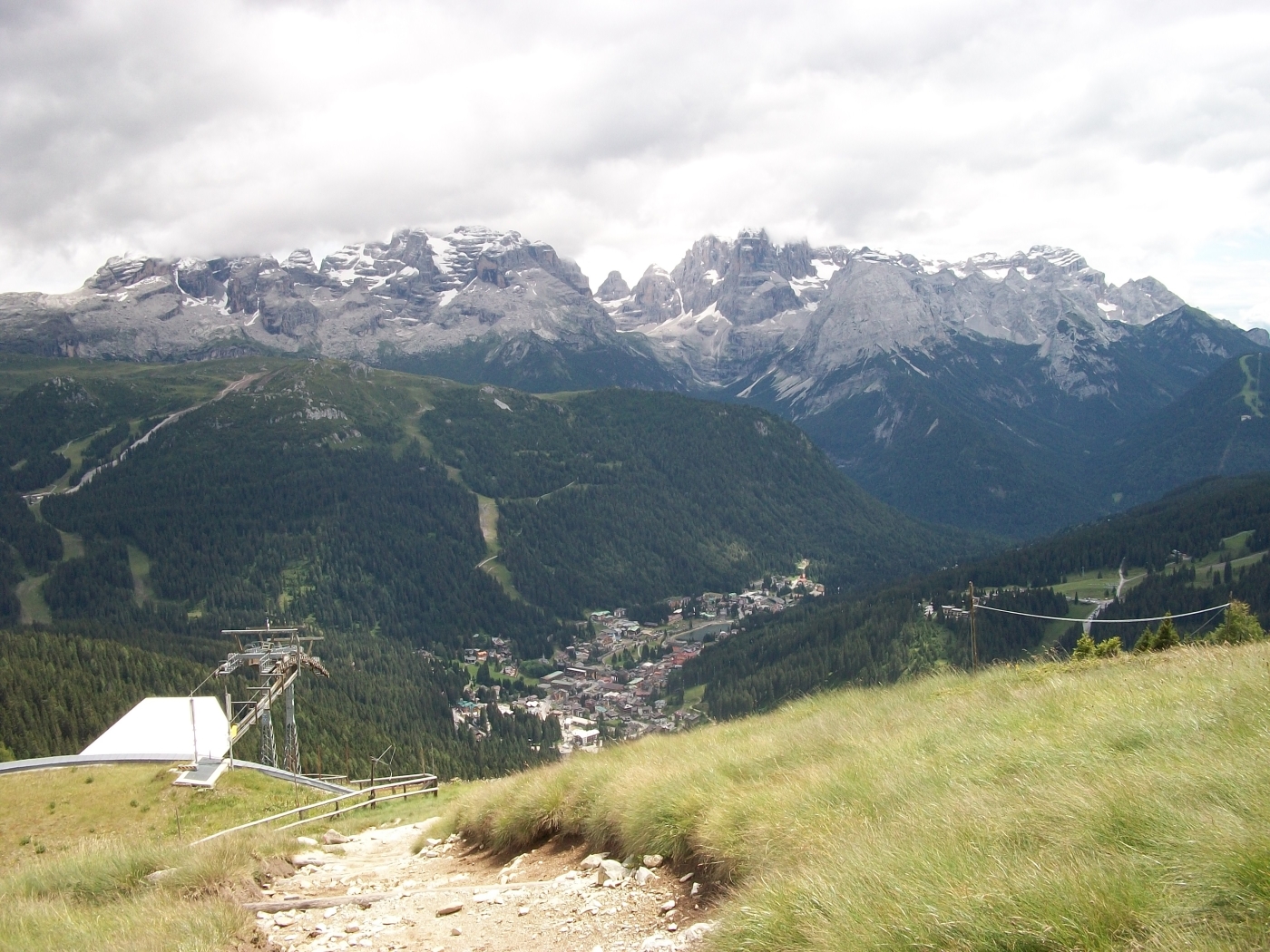 If you take a sample of rock from one of the main peaks of Northern Italy’s Dolomite Mountains and add hydrochloric acid, the effervescence will be quite weak. The streaming of carbon dioxide bubbles will be far more vigorous if you add the same acid to rocks from most Alpine peaks. Both samples contain carbonate, the source of CO2 ,  but the rates differ because the Dolomites consist of mostly CaMg(CO3)2 *, a mineral known as dolomite, whereas the Alps are mostly limestone, which contains calcite mineral CaCO3.

How does dolomite form?

First, there has to be some calcium carbonate in the environment. In warm areas, especially in reservoirs of magnesium rich- water in shallow lagoons, magnesium ions will penetrate the calcite and get incorporated into the crystal to yield dolomite:

The material of the Dolomite peaks  was made in the Upper Triassic Period, about 200 million years ago when Pangea was splitting up and 70% of species were becoming extinct due to massive volcanism and ensuing global warming. It helped dinosaurs extend a long-lasting advantage over mammals.

How does calcium carbonate form?

It’s well known that algae, bacteria and especially molluscs are capable of precipitating calcium carbonate. But not to be to reductionist, it should be pointed out that the approximately 5% of a shell that does not consist of CaCO3 makes the shell much stronger. The minor component consists of a protein micelle embedded within the calcium carbonate crystal. Furthermore, the crystal growth itself depends on the protein matrix binding to Ca2+.

But where does the carbonate ion come from?

Calcium carbonate is not very water-soluble, so carbonate cannot be obtained directly from limestone in the ocean. Molluscs and bacteria rely on urea hydrolysis. With the help of an enzyme, urea reacts with water to produce both carbamic acid and the alkaline molecule ammonia. Carbamic acid, in turn , can be hydrolyzed to produce carbonic acid (H2CO3) and more ammonia. Since carbonic acid is in equilibrium with hydrogen carbonate and H+ ions, the hydroxide from the aqueous ammonia-equilibrium can then make carbonate according to the following:

What are other sources of hydrogen carbonate?

Also found in baking soda and in every living cell, hydrogen carbonate ion abounds in the sea. And most of it does not come from the hydrolysis of urea. That biochemical cycle serves mostly to provide the ammonia which raises the pH in order to precipitate carbonate. So where does most of the hydrogen carbonate come from? When carbon dioxide dissolves in rainwater, it forms carbonic acid which weathers a variety of rocks, ranging from feldspar to mica.

Feldspars are characterized by Si3O84-, while micas contain Si3O108- . When they react with carbonic acid, they liberate positive ions, transform the silicate polyatomic to a different silicate in the form of clay and also release quartz and hydrogen carbonate ion. Rivers then deliver the ions to the sea where some serve as a reactant for calcium carbonate production in shell material and coccoliths, which originated at the time that the Dolomites’ material was formed.

How did dolomite from the sea become mountains that now reach the clouds?

The Earth’s most common intrinsic igneous rock is granite, which contains quartz along with two forms of feldspar and mica. Granite, has large crystals, suggesting that they cooled slowly underground. The solidified rock only became exposed by uplifting through plate tectonics. The same mechanism is also what lifted the dolomite material out of the sea as the African plate collided with the European one, a process that’s been ongoing for 40 million years and will continue to do so, perhaps closing off the Mediterranean.  The collision not only created the Dolomites but the Alps and the Pyrenees.