I created a transcript of a  Quirks and Quarks’ Bob McDonald- interview with NASA’s Stefanie Milam. It’s been slightly edited, and in brackets are my own detailed additions for those interested in learning a little more chemistry. Milam is a chemist by profession with a specialty in rotational spectroscopy. In the recorded interview, her enthusiasm for her research is apparent and contagious.

Bob: Comets can be pretty spectacular objects in the night sky, and they can also provide important clues to the formation of our solar system. But most comets orbit far from the sun where they and the secret storm within them remain frozen. On occasion though a gravitational disturbance will bring one closer, where the heat of the sun melts away the comet’s signature–components which can then be analyzed by scientists. 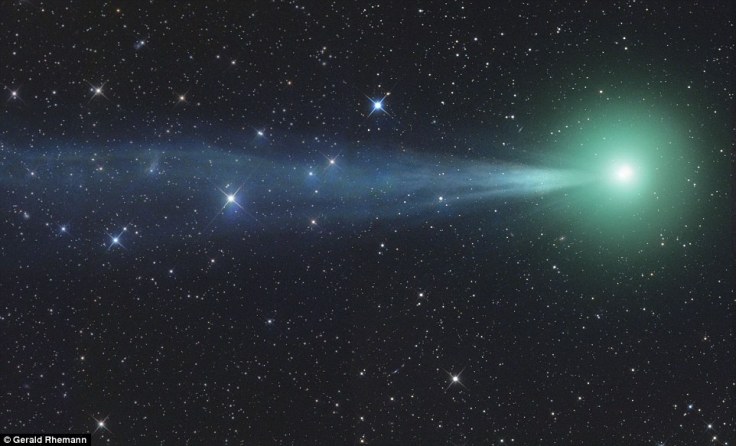 Well that’s what happened to Comet Lovejoy, which recently ventured close to the sun and gave scientists, including Dr. Stefanie Milam of the NASA Goddard Space Flight Center in Greenbelt Maryland, cause to celebrate. In fact when they discovered its composition, they have even raised a glass or two. Dr. Milam, welcome to Quirks and Quarks.

Stefanie: Thank you very much.

Bob: Tell me about Comet Lovejoy.

Stefanie:  Comet Lovejoy was a great comet for us astronomers. Comets are very few and far between whenever we get a nice bright one in the sky. Comet Lovejoy was only discovered a few months before we actually started observing it. It’s from the outer, outer edges of the solar system, way past Neptune, Pluto and New Horizons. So when it came in and all the icy material was melting, its activity was detected by Terry Lovejoy, an amateur, who discovered the comet. He notified the proper channels so larger telescopes could begin observing it.

Bob: When did the comet go by?

Stefanie: The comet reached its peak activity from mid to late January this year (2015).

Bob: Comets are called dirty snowballs , but in general what are some of the things that come off a comet when it gets close to the sun?

Stefanie: So water is the dominant molecule that you see in  comets, but there are lot of other things like hydrogen cyanide (HCN); things that everyone should know about like formaldehyde (H2CO), which preserves people when they pass away, methanol(CH3OH), carbon monoxide(CO), carbon dioxide(CO2), and we’ve also detected ethylene glycol (HOCH2CH2OH), which is used in antifreeze… ( Glycine, an amino acid, has also been found in comets.)

Stefanie: …giggles…. It is really exciting because it’s showing us that we have a rich, organic chemistry in comets.

Bob: Now when you say “peak activity”, what do you mean by that?

Bob:  When you examined Comet Lovejoy, what was different about it?

Stefanie: At first there didn’t seem to be much different; it wasn’t even one of the most spectacular comet we’d had. It was not as bright as Comet Hale Bopp that appeared in the mid to late 1990s (1995 to 1997; it was visible for 18 months), but it’s been the best comet we’ve had in the last decade or so.

Bob:  So what kind of things did you see this time that were surprises?

Stefanie: So now we’ve had a fantastic detection of sugar and ethanol. So ethanol is the same alcohol that we have in our drinks. (The sugar found was the  simplest monosaccharide sugar, known as glycolaldehyde. Ethanol and glycolaldehyde ‘s abundance relative to methanol and water  is somewhat higher than what’s measured in solar-type protostars.)

Bob: Drinking-alcohol coming off a comet?

Bob: Were you surprised by that?

Stefanie: We’ve reached a level of technology where we can start looking for things on a very fine level, and we could this now with comets because we could recover a large number of “fingerprints”. Compared to 20 years ago when we could recover 1 fingerprint at at time, now we could look for 50 molecules at the same time.

Bob: How do you do that?

Stefanie: Every molecule has a unique fingerprint, corresponding to a different frequency. We aim the radio telescope at an area , and we start looking for spectral signatures that correspond to given molecules. The flux of each fingerprint is proportional to the quantity of the specific molecule.  (Gas molecules rotate. If they have a dipole caused by unequal sharing of electrons by  atoms, the molecules emit energy when they go from a high quantized rotational state to a lower one. As the comet approached the sun and molecules were being released from the comet’s surface, an IRAM 30m radio telescope in the 211–272 GHz band on Earth picked up the characteristic frequencies of ethanol and other molecules.)

Bob: So how would alcohol end up on a comet?

Stefanie: That’s an excellent question. Umm.. we’re striving to see how much chemistry is happening on the surface of a comet when the solar system actually formed. Was it highly processed or was it frozen material that’s never been altered since the formation of the sun–that’s representative of the same cloud, dust and ice that formed other solar systems?  If that’s the case, then that chemistry has been preserved and it’s remnant from when the sun and other systems formed, which would mean that the chemistry is ubiquitous.

Stefanie: So that means that there could be other solar systems producing “wine”.

Bob:  So you’re saying,  either this alcohol is very well-aged or it was “fermented” along the way.

Stefanie: Yeah, that’s a great way to think of it.

Bob: Well if these comets are spewing out alcohol and sugar, what effect does this have on our solar system?

Stefanie: Well as the organic material is being spewed out, some of it actually survives the harsh environment of space. So we’re distributing organic material in the solar system, and the more complex that organic material is, the more exciting this is for us. It means that there is really a rich chemistry, a prebiotic one that’s so pristine coming from interstellar space. It would be the same mixture raining on other planets in other solar systems.

Bob: Where is Comet Lovejoy now? 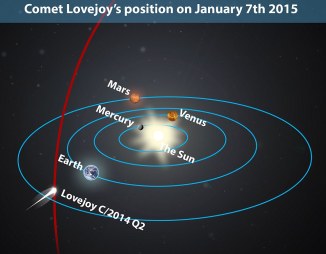 Stefanie: It’s well on its way out of the system.

Bob: Will we ever see it again?