More than once, I intended to prepare  hard boiled eggs  for my kids in the morning, placed water in a pot but forgot the egg. If I remembered within 30 seconds or so, it was still safe to place my hand in the water, but it was  a bad idea to touch the pot itself. Metals warm up faster than water does—that’s what a low specific heat implies. Specific heat is a characteristic property that measures how much energy it takes to raise the temperature of 1 gram of a material by 1 oC.  The higher the c value is, the more difficult it is to warm up that substance. By the same token, substances with high specific heats also lose their heat with difficulty, while metals cool off with ease.

The high specific heat capacity of water helps temper the rate at which air changes temperature, which is why temperature changes between seasons is gradual, especially near large lakes or the ocean. Water is the reason why Toronto is milder than Montreal.

It’s the reason that the Gulf stream can retain the heat of water heated in the Caribbean and carry it towards London, England,  a city with an average temperature of 7 ºC, even though its latitude is six degrees more North than that of Montreal, whose average January- temperature is only -9 ºC.

If water’s specific heat was lower than it actually is, life would not be possible. The rate of evaporation would be too high, and it would be too difficult for the evolutionary precursors of cells to maintain homeostasis. Why is water special? The reason it is difficult to raise water’s temperature is that hydrogen bonds exist between molecules of water. The hydrogen atoms of one molecule are attracted to the oxygen atoms of other molecules. (see the dots = . . . . in the adjacent diagram. )

Each set represents a hydrogen bond. Five molecules are shown in all)) To overcome this attraction, energy is needed. The bonds between the water molecules are like the links between the wagons of a train. Just like it is difficult to get a big train to reach a high speed, it takes a lot of energy to warm up water. Once the train is moving, it is difficult to stop. Similarly it is difficult to cool water. Of course, in the liquid state, the links are not as fixed as those of train links. As molecules rotate, they constantly break and reform H-bonds, but their overall effect is to maintain attractions within the group.

A very useful formula allows us to calculate the amount of heat either absorbed or lost by a substance during a physical change: Q = m c ΔT , where Q = quantity of heat,  m = mass being heated or cooled, c is the specific heat and  ΔT is the change in temperature.

Now imagine two identical masses, of say, water and copper,  each at the same temperature, receiving the same amount of heat. Since Q is equal, then

the masses in the equation cancel, and we end up with: 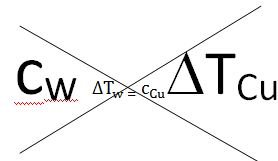 The inverse relationship graphically represented within the cross reveals that for water’s product cwΔTw to be equal to that of copper, a bigger c  entails a smaller ΔT. For copper it’s the reverse. A smaller c entails a bigger ΔT.

While water’s specific heat of 4.19 J/(g º C) is elevated to that figure by its intermolecular bonds, no such attractions exist between copper atoms. If temperature extremes are excluded, the specific heat of most metals can be predicted from c = 3 R/M, where R = gas constant 8.31 J/mole K and M = molar mass in grams per mole. Since c, in our context , is based on a temperature difference, any  ΔT is equivalent in both C(Celsius) or K(Kelvin) scale of temperature.  c = 3*8.31 J/mole K / (63.5 g/mole)= 0.392 J/(g K )= 0.392 J/(g º C), close to the experimental value of 0.386 obtained by dropping a heated, weighed piece of pure copper into the cool water of a calorimeter and measuring the maximum temperature attained by the water. ( Both the initial hot and cool temperatures also have to be measured).