Since Breaking Bad became a hit in 2008,  many male chemistry teachers across the continent have been asked by their students, “Sir, do you watch Breaking Bad? Because the character reminds me of you.” It’s not difficult to figure out why. Few popular TV programs feature as much chemistry as Breaking Bad, and most adolescents have only had one chemistry teacher in their lives.

After finally getting around to watching the pilot and subsequent episodes, I admitted that I liked the drama but was confused over the supposed similarity between White and me.
“Do you really believe that if I had terminal cancer, poor medical insurance and a pregnant wife, I would resort to making illegal drugs and killing people?”, I asked them, smiling.
“No, but you’re both chemistry teachers,” was the reply.

My neighbors who were a little late to the Breaking Bad party and who had just binged on the series this winter stopped me in the street to remind me that I looked like Walter White. For this particular couple, it wasn’t just the chemistry, it was the hair cut and my son.

Breaking Bad  is not primarily  designed to be a science educational program. And it’s just as well. Regardless of how important science is to survival and understanding of the universe, the arts remain crucial in revealing aesthetic and existential truths. This drama is centered around moral dilemmas, self-deception and extreme rationalization. However, even though the program exposes the dark side of chemistry through its illicit drugs, poisonings and explosions, its scientific content is researched and reasonably accurate. It gets young viewers to realize that chemistry is not black magic but a mature science which makes reliable predictions about the behavior of matter.

There are two scenes from Season 1 that illustrate this well. Soon after Walter White synthesizes large crystals metamphetamine, his former student Pinkman is astonished by the size of the crystals. Unaccustomed to meticulous preparation and proper equipment and unaware that they grow large if pure and slowly crystallized, he attributes their beauty to a special if not mysterious talent.

After getting frustrated shopping for a low density polyethylene vat large enough to contain a corpse, Pinkman circumvents White’s instructions and dissolves a phosphine-poisoned victim in his bathtub with a couple of gallons of hydrofluoric acid.

WALTER WHITE: Bathtub? What do you mean, bathtub?
JESSE PINKMAN: That’s another thing. Why do you have me running around town trying to find some stupid plastic when I have a perfectly good tub I can use?
Soon after, the upstairs tub and its contents fall through the ceiling.

WALTER WHITE:  What was that you were saying about that “stupid plastic”?…. Hydrofluoric acid does not attack plastic, but it will dissolve metal, ceramic, glass…

The hydrofluoric acid incident is highly exaggerated, considering the actual properties of HF.  A spring 2013 Mythbusters episode exposed the inaccuracy. The acid does have the peculiar property of reacting with glass-like materials and can slowly attack flesh, but it leaves a lot of fat tissue intact. In order to dissolve most a of dead pig, Mythbusters had to rely on concentrated sulfuric acid and a undisclosed solution. And even several gallons of that mixture were incapable of causing the bathtub catastrophe from the Breaking Bad episode. (Larissa Schuster, the “acid lady” , a real-life biochemist who killed her husband in 2003 used hydrochloric acid, which is also an odd choice. She was sloppy too, dissolving only half the body. )

On the surface it would seem unlikely that an educated man would find himself in the original predicament that led to the difficult choices and ensuing complications. What was Walter White thinking, living his life without adequate medical insurance and financial security and yet deciding to father a second child late in life, as if he was guaranteed to physically expire only at the average human lifespan of 78 or so?

It may seem odd, especially in the case of a chemist who knows that probability creeps into everything. An electron’s motion cannot be tracked down to an exact location like that of a planet. There is only a likelihood, albeit high, that it will be confined to a certain orbital, depending on its quantum state. When molecules react, conditions of temperature and pressure change the probability that they will collide with the correct orientation and sufficient momentum. But for an individual molecule, there is no guarantee that it will indeed react, even though the bulk of its peers may have more than the required activation energy.

Of course chemists and other scientists are not consistently rational in their work, let alone in their personal lives. They live like everyone else, taking chances, sometimes without hedging their bets. It’s why the premise is plausible. 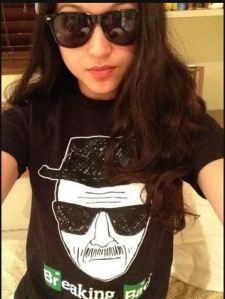 As the series progressed we saw Walter progressively evolving into “Heisenberg”. He names his druglord-alterego after a scientist known for the uncertainty principle. As Walter slowly evolves into Heisenberg, we witness him struggling but then consistently making questionable choices with reprehensible consequences for people around him, some of whom are innocent. As his decisions feed his lust for power, his former over-submissive and over-polite persona becomes merely a convenient cover for his secret life.

4 thoughts on “Reflections On “Breaking Bad””