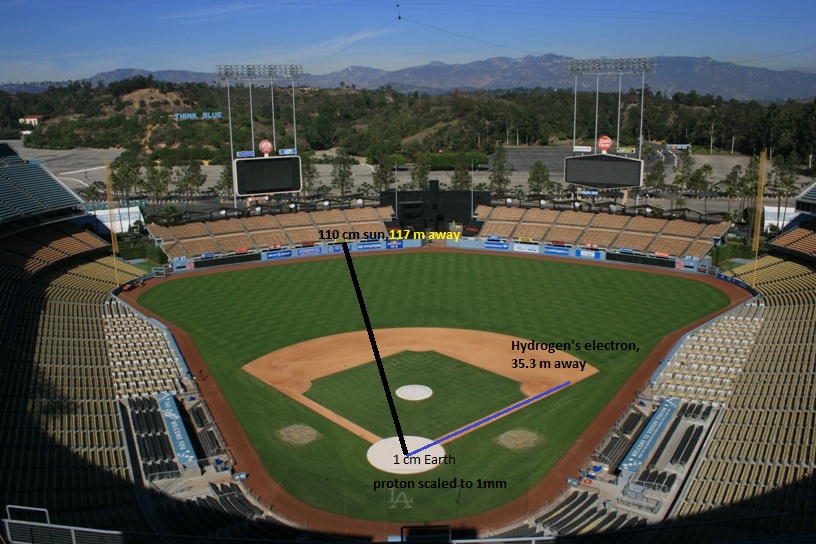 Atomic and astronomical scales are not in the least intuitive. Powers of 10 tables have often been used to contrast the size of stars with the radii of atoms, but since spring training has arrived, why not use the baseball diamond to mentally animate some of the baffling dimensions of science?

If you reduce the Earth to the size of an eraser (1 cm) at the end of a pencil at home plate, the sun (109.7 times wider) becomes a 1.1 meter beach ball, 117 meters away. That would be about a meter past the left or right center field wall at Dodger Stadium. Interestingly, in this model,  the next nearest star would still be triple the distance (31 000 km) between Alaska and India. From a mass perspective, if the earth’s mass is reduced to that of a baseball, the sun would weigh as much as 644 spectators, averaging 75 kg each.

If you turn the pencil around and make a one millimeter dot on home plate to represent a proton*, well, if you scale up such a small particle to those dimensions, you will find a hydrogen  atom’s lone electron past first base, 35.3 meters away. This reveals what Rutherford demonstrated over a century ago, that an atom is mostly empty space, just like the baseball field is mostly empty if fielders are not mobile. If the mass of the electron is scaled up to that of a baseball, then the proton, which is 1836 times more massive, acquires the mass of all the bats in the clubhouse (285).

What if the Milky Way galaxy is scaled down to the size of Dodger Stadium? How small does the Earth become? Well, the Earth would only be 6 X 10-12 m wide, about 10 times smaller than the smallest atom. How small is a baseball player rendered? To about the upper limit for the size of a quark. But we’re getting too abstract. If we scale Prince Fielder’s mass down to that of an H1V virus, how massive does the Earth become? As massive as a blue whale.