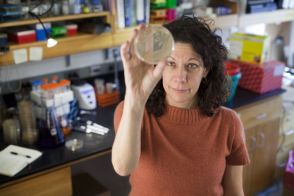 Princeton University’s Bonnie Bassler has continued to reveal that nature is stranger than science initially supposes. She discovered that before bacteria conjugate, produce spores, form biofilms, cause disease or bioluminesce, they first take a “census of their population”. This is done by “quorum sensing” which involves the release and detection of signaling molecules. Surpassing the appropriate threshold concentration of these molecules activates genes responsible for a specific bacterial behavior. Prior to her work, it was never imagined that crucial bacterial functions were modulated by social interactions.

From a more meticulous point of view, another surprise to come out of her research is the chemistry of an autoinducing molecule for the bioluminescent bacteria Vibrio harveyi.

1) Looking at the structure below, what is unusual about this biomolecule, a furanosyl borate diester?

2) And here’s an even more interesting question: how can knowledge of quorum sensing potentially help us with the problem of antibiotic resistance?
1) Although boron is present in seawater, it was not known to be incorporated in biological molecules.
2) Antibiotics work by disrupting bacterial growth. The antibiotic molecules are usually mimics that compete with a bacterial building block. But the variants that have not been fooled by the mimic become increasingly more common through natural selection. These bacteria are no longer killed by say, penicillin. (In this specific case, the resistant bacteria have enzymes that break down penicillin.) But knowledge of quorum sensing can lead to the design of molecules that will interfere with autoinducing molecules. In other words, by short-circuiting bacterial communication, the disease-causing effects of pathogenic bacteria will not materialize.