Major edits: November 2014 and March 2020 I had filtered the tone and content of the original piece written in 2011 for fear that it would be shot down on a conservative website that once hosted my blogs. But I’ve decided to reveal the rest of the story. The more recent edit has deleted some inaccurate information and provided more recent evidence.

When I was a chemistry student and shortly after I graduated, I analyzed fat content, dextrose and nitrite levels in hot dogs and other meat products for a well-known company. I’m not naming them because for all I know they may have mended their ways. Also, I never gathered evidence that the whole industry was or is guilty of the things that I witnessed.

Nitrite (NO2–) is added in small quantities to preserve and especially to artificially color many cold cuts and hot dogs. At the time, acceptable limits for NO2– ranged for 100 to 150 ppm (mg of nitrite per kg of meat), depending on the product. But levels frequently surpassed the guidelines by 25 to 50%. At first I questioned my own analyses, but they were confirmed by my supervisor. The head of the lab said he would look into it at the production end, but weeks later the problem persisted. In general we were instructed not to carry out the analyses in duplicate, unless an anomalous result surfaced. We had learned in the statistical math section of analytical chemistry that tests of the sort should be carried out in triplicate; single-analyses were a real no-no. But that was another issue altogether.

One day an inspector from Health and Welfare Canada came into the lab, and I told him about the elevated nitrites problem. He told me he was just a summer replacement with only a background in CEGEP ( a junior college) health sciences, and so that he could not really understand what I was saying. Later that summer, I was switched to the night shift, and I was alone in the lab. Digging into records from the previous two years, I found that other technicians had also been routinely finding high levels of nitrite (exceeding guidelines) in two specific products.

I noticed firsthand the pale color of the hot dog mixture prior to nitrite addition, and it would not have been so pale if the ingredients weren’t such a mishmash of intestines and other meat “scraps”. Interestingly, nitrite is not an additive used in cured ham like prosciutto, which unlike cold cuts and hot dogs, contains of only hind legs of pigs and salt.

Even in the 1980s, it was known that nitrite in the presence of protein had been linked to the formation of nitrosamines (N-nitroso compounds). Specifically, N-Nitrosodiethylamineand N-Nitrosodimethylamine are group 2A probable human carcinogens.  Processed meat consumption is a group 1 carcinogen. In Volume 94 of the Monographs of the International Agency for Research on Cancer (IARC), they state:

While we were having lunch one day, a senior scientist at the company laughed off the suggestion that nitrites posed a danger to the public. 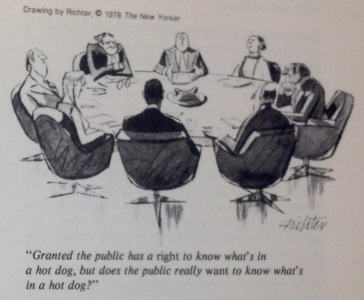 Most of the public was unaware that when having a hot dog, what they were really tasting were the strong spices, salt and sugars and not the meat scraps. Our analyses revealed that the fraction of dextrose in hot dogs ( close to 10%)  was routinely greater than that of protein, placing the product somewhere on the spectrum between meat and candy. (Currently, according to USDA analyses, things are better from that perspective. The ratio of protein to sugar in a 100 gram sample ranges from 6 to 10 grams of protein to 1 gram of sugar. Yet fresh meat or fish has triple the amount of protein.) Their ham was also adulterated with water, which then facilitated the growth of bacteria, thus increasing the need for nitrite additives. Even today processed ham is still diluted, slicing the protein level to half of what it should be.

When working there, I was strongly tempted to become a whistle-blower and to go public with what I thought were outrageous company practices from both a health and scientific standpoint. But relatives and friends were not supportive, and I was too wimpy to act alone. I called Health and Welfare Canada, and asked a “what if levels-were-around-150 ppm-instead-of-the-accepted levels- type of question”. The PR guy I got on the phone replied that it was impossible because their inspectors on site verify that sort of thing! Aside from writing this piece, I have told my story to hundreds of students in my career, and since those analyses, I don’t think I’ve eaten more than a couple of meat-hot dogs in the last three decades.

A Journal of the National Cancer Institute study in 2005 found a link between processed meats and pancreatic cancer. In recent years, many companies have used celery extract, which is rich in nitrites as a way of deceiving consumers into thinking they are buying a healthy alternative. A 2019 study in the International Journal of Cancer confirmed again that there’s an increased risk associated with consumption of processed meat and colorectal cancer, but no increased risk when the meat was traditionally processed without nitrites.

Defenders of nitrite in processed meats like to point out that lettuce and spinach can also have elevated levels of nitrate (which can be converted in to nitrite). There are three problems with their argument:

(1) Not all samples have concentrations comparable to nitrite levels in processed meat. If the lettuce and spinach is not grown with fresh manure or with synthetic fertilizer, the nitrate levels plummet. I know that firsthand. I’ve done nitrite analyses of both store-bought lettuce and my own home-grown product.

(2) More importantly, vegetables are low in protein, so no nitrosamines are formed. The nitrite argument is, in other words, a deflection from the important issue of nitrosamines, which most people do not know exist.

(3) The argument is akin to the nuclear industry’s old trick of attempting to abate fears about radiation wastes by pointing out that there are already natural radioactive isotopes in the earth’s crust and in our bodies. In both cases, what they are hiding is that by artificially increasing the background concentrations they are increasing the risk of complications.

4 thoughts on “Nitrite In The Hot Dogs Of My Youth”